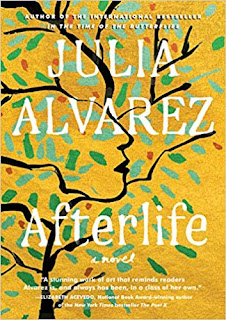 It's always something to celebrate when Julia Alvarez publishes a new book, and her latest, Afterlife, is no exception.

As this quietly moving novel opens, Antonia is waiting for her husband Sam to meet her for a dinner celebrating her retirement from teaching English at the local college. Sam never makes it, dying of a heart attack on the side of the road.

A year later, Antonia is still grieving Sam, the "good cop" to her "bad cop". At dinner parties, Sam was the one who spoke passionately about climate change, and put up a sign that read "Move Vermont Forward" after their neighbor Roger, who owns a farm, put one up that read "Take Vermont Back".

The writing here is gorgeous, as Antonia mourns Sam.


"She is keeping to her routines, walking a narrow path through the loss- not allowing her thoughts to stray. Occasionally, she takes sips of sorrow, afraid the big wave might wash her away.'

People who have known deep loss will know that feeling.

One day, Mario, one of the young undocumented Mexican men who work on Roger's farm, comes over to help clean out her roof gutter. He asks Antonia to help him with a problem. His girlfriend Estela is in Colorado and wants to come to Vermont with Mario. The man who brought her across the border wants more money. When Estela finally arrives, she is pregnant, which further complicates the situation.

Antonia is reluctant to get involved, she is still so fragile. But she can hear Sam's voice in her head, telling her that these two young people need her help. She is willing to help, but only up to a point. She asks herself if this is all Sam's "afterlife will amount to? Sam-inspired deeds from the people who love him?"

At the same time, Antonia's sister Izzy disappears on her way to visit Antonia and their other sisters, Mona, a therapist who rescues dogs, and Tilly, who can't sit still. Izzy is a psychologist, and she is also probably bipolar.

Nobody writes the sister relationship better than Julia Alvarez ( In the Time of the Butterflies and How the Garcia Sisters Lost Their Accents). As the sisters revert to their childhood routines, at first angry at Izzy, then afraid for her, they become what Antonia calls "the Dominican Greek chorus".

The sisters also reminded me somewhat of the March sisters from Little Women, with the voice of the deceased mother, Mami, a stand-in for Marmee from the Louisa May Alcott classic. Anyone who has sisters will understand the relationships among these women.

Afterlife deals with the themes of grief, mental illness, family relationships, as well as the issues facing undocumented workers, with humanity, and poignancy. Alvarez writes so beautifully, and the character of Antonia is so fully-realized, we feel her pain.  I highly recommend it.

Thanks to Algonquin Books for putting me on Julia Alvarez's book tour.

Posted by (Diane) bookchickdi at 1:24 PM