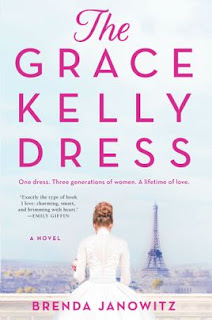 Brenda Janowitz's latest novel, The Grace Kelly Dress tells the story that a wedding dress plays in the intersecting lives of three women.

Rose is an apprentice seamstress to Madame Michel, the premier Paris dress maker of whom it is said that "to wear a custom Madame Michel wedding dress is to guarantee a happy marriage". Every bride in 1958 Paris wants a dress like the one Grace Kelly wore at her wedding to Prince Rainier, and Madame Michel is the one wealthy brides turn to make that happen.

When Rose is chosen to design and make a wedding dress for Diana, she can hardly believe it. It is important to the Madame Michel brand that this dress be perfect, and Rose feels the pressure. Diana's handsome brother escorts Diana to her appointments, and Rose finds herself falling for him, even though he is also engaged.

In 1982, Joanie is engaged to her perfect man. Matthew is president of his fraternity, Joanie's sorority brother-fraternity. He is smart, kind, and loving and is sure to be successful. But why isn't Joanie more excited to be marrying the best catch around? She is more excited about wearing her mother's wedding dress, a copy of Grace Kelly's wedding dress. Joanie is a very traditional woman, even called a goody-goody by her friends, but still something isn't right.

In 2020, Joanie's daughter Rachel is preparing for her own wedding. Rachel, better known as Rocky, is the complete opposite of her mother. Rocky is the CEO of her own video game app company, and she likes wearing motorcycle boots and has tattoos. Her mother Joanie has been busy planning Rocky's wedding, and is so thrilled that Rocky will wear her own wedding dress. She will be the third generation to wear the dress, and this tradition means everything to Joanie.

But Rocky doesn't want to wear the dress and she doesn't know how to tell her mother this. Rocky is more like her late father, and often feels left out of the conversation between her mother and sister, who are so much alike. Her sister can't seem to commit to anyone, so if Rocky doesn't wear the dress, Joanie's dream will disappear.

The Grace Kelly dress is about three women each finding her own voice in her life. Rose has been given a chance to further her career, but when love comes into her life she has a decision to make. Traditional Joanie, who always follows the rules and never disappoints her parents, has to decide if she can stand up for herself or do what is expected of her. Although Rocky is the CEO of her company, making important decisions every day, she doesn't know if she can be honest with her own mother.

I liked the theme of women deciding what is important in their own lives, and standing up for themselves, even if it means disappointing people they love. Even though each woman faced different expectations (because of the times they were living in), they had be true to themselves. Fans of Adriana Trigiani's Valentine series would enjoy reading The Grace Kelly Dress. I recommend it.

Thanks to Harlequin for inviting me to be a part of their Romance & Women's Fiction blog tour, and providing me with an egalley for an honest review.