The Henna Artist by Alka Joshi

With all the craziness going on in the world today, it's a good time to get lost in the world of 1955 Jaipur, India in Alka Joshi's marvelous debut novel, The Henna Artist. 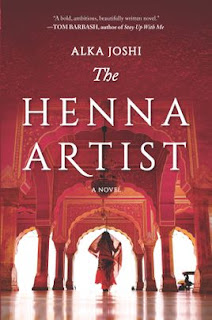 Lakshmi fled an abusive arranged marriage, leaving behind her husband and parents to go to the city of Jaipur, following the recent independence of India from the British Empire. She is a henna artist to many of Jaipur's wealthy women, where she has cultivated a large clientele who turn to her to decorate them for every celebration. But Lakshmi dreams of being a matchmaker for wealthy families, and when an opportunity arises, she is ready to take advantage of it.

She also sells sachets of herbs that help people with illnesses of all sorts. Lakshmi learned how to grow herbs that heal from her former mother-in-law, whom she loved and respected. When Samir, a wealthy and influential man, asks her to sell him herbs that prevent his mistresses from getting pregnant, Lakshmi agrees.

Lakshmi is building a home of her own, a place where she can bring her parents to live with her. One day her abusive husband shows up with a thirteen year-old girl, a sister she never knew she had. Radha is angry that Lakshmi abandoned her and her parents, and resents Lakshmi.

Life was moving upward for Lakshmi, but the arrival of Radha seems to bring a turn of luck for her. Her precarious finances take a big hit when vicious and untrue gossip about her cause her clients to drop her.

Lakshmi's striving for independence mirrors the country of India's independence from Great Britain. Lakshmi, like India, is stuck between long-standing traditions of a strict society and a desire to be modern and independent.

I was totally enmeshed in the sights and sounds of 1955 India. Joshi descriptions are rich and she uses the language of the time, with a helpful index in the back of the book that gives you the definitions of the words she uses. Food plays a big part, and she also gives the reader two recipes- one for Batti Balls and one for Royal Rabri. You can almost smell the food wafting off the page.

Her characters capture your heart- Malik, the young boy who acts as Lakshmi's assistant, sister Radha, and even her abusive ex-husband who shows more than one color to his character.

But it is Lakshmi's story. You will root for her to succeed, and ache for her when her struggles seem insurmountable. Lakshmi is a truly unforgettable character. I give The Henna Artist my highest recommendation.

Thanks to Harlequin for putting me on their 2020 Spring Reads Blog Tour.