Spring begins this week and that brings to mind certain things- spring training for major league baseball, and spring break for teachers and students. Two wonderful debut novels feature many characters sharing their stories in those settings in this month’s Book Report.

Baseball fans are settling in for the start of a new season, and Emily Nemens’ debut novel, The Cactus League is set during spring training for the fictional major league Los Angeles Lions. Nemens tells her story through the lives of several characters, all of whom have an interesting take on their spring in Arizona.

Jason Goodyear is a former league MVP, one of the best ballplayers in the league, with a reputation as an all-round good guy. He’s handsome, kind to his fellow players as well as fans, with a Derek Jeter-like reputation.

But something is off with Goodyear this season. His two-year marriage to his schoolteacher wife is over, he is withdrawn, and his personal and professional life seem to be spiraling downward. He is hiding something big from everyone, something shocking. 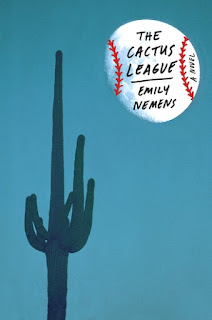 Other people get to tell their own stories- the pitcher recovering from Tommy John surgery trying to hide that it did not work, the batting coach not yet ready to retire, the team owner with a secret, the woman who has a relationship with a different ballplayer every season (think Annie Savoy from the movie Bull Durham), the players’ agent, the agent’s young assistant, and the overhyped rookie who has discovered that he is not as good as he was in high school.

Nemens weaves their stories together to place the reader smack in the middle of a fascinating spring, and each character is so well-drawn, a remarkable feat as there are so many characters. I was completely captivated by this book, and it is a must-read for baseball fans.  Nemens is clearly a lifelong baseball fan and it shows. It would make a terrific limited television series.

Other good novels with a baseball theme include Stephanie Evanovich’s The Sweet Spot, Linda Holmes’ Evvie Drake Starts Over and Chad Harbach’s The Art of Fielding.

If you’re a teacher going on spring break who will miss your colleagues, Roxanna Elden’s debut novel Adequate Yearly Progress will fill that void. Billed as The Office but set in an urban high school”, we are introduced to the teachers from Brae Hill Valley in a large Texas city. 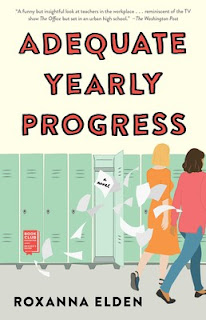 We meet Lena, a young spoken-word poet who moved from Philadelphia and is struggling to get her students engaged in English class. Mrs. Reynolds-Washington and Mrs. Friedman-Katz “two middle-aged women shared a love of tremendous jewelry, brightly colored pantsuits, and other people’s business” love to gossip and judge others.

KayTee is an idealistic second-year teacher from TeachCorps who writes an anonymous blog about her experiences that goes viral. Dedicated biology teacher Hernan is Lena’s best friend looking for more than friendship. Maybelline is an uber-organized math teacher raising her young daughter on her own. Football coach Ray just wants to be left alone to win football games.

A new superintendent is hired for the city, a media superstar who has written a best-selling book and loves the spotlight. He announces a new program- Believers Make Achievers Zone, a group of schools with “poor students and poor test scores who will be receiving special attention” from him.

That special attention comes in the form of a consultant from TransformationalChangeAdvocacyConsultingPartners, whose main objective seems to be getting teachers to write a different Curriculum Standard of the Day in large letters on the white board each day (such as ALL STUDENTS ON TASK, ALL THE TIME).

Teachers are now required to keep extensive binders filled with abundant data about the students that will be used to “innovate and catalyze disruptive change”. There is now an Office for Oversight of Binders and Evidence of Implementation, which makes math teacher Maybelline very happy as she is a big fan of organized data in binders.

Adequate Yearly Progress is laugh-out funny in parts (the comments on KayTee’s blog are especially hilarious), somber in other parts, and you don’t have to be a teacher to enjoy this clever workplace book (but if you are, you will enjoy it on another level). Like The Cactus League, Eldens manages to make each interesting character’s story stand out as they intersect.  Fans of Laurie Gelman’s Class Mom will enjoy it.