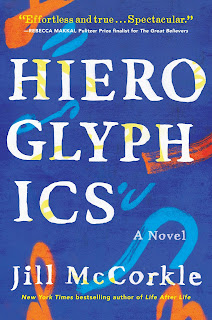 When a book pulls you into its orbit as Jill McCorkle's Hieroglyphics does, you know you are in for something special.

Lil and Frank are elderly, retired and moving from the home where they raised their family in Boston to North Carolina to be near their daughter and grandchildren. Frank also grew up in that area, and one thing he wants to do is see the house where he lived with his mother, brother and stepfather.

Frank knocks on the door of his old home, and finds single mom Shelley living there with her young son Harvey. Shelley works as a stenographer at the courthouse, and has to record the trials of people charged with horrific crimes.

She is haunted by the terrible things that people do, and her young son Harvey is obsessed with ghosts, graveyards and serial killers, which upset the other children and teachers with whom he comes into contact.

Shelley is reluctant to allow Frank into her home, knowing that women who are too trusting get killed. Frank leaves, but he is drawn to the house and trying to come to terms with how his life there as young boy affected his adult life.

Frank's father was killed when he was young boy, and Lil lost her mother to cancer when she was a young girl. When they began dating, these losses bonded them together.

While packing up their old home, Lil finds notebooks and letters that she kept. In these notebooks she logged her daily life, filled with mundane things such as the weather for the day, and her daily tasks. They were also filled with more- her deeper thoughts about her marriage, her struggles as a woman, wife, and mother.

McCorckle brings her characters to life through their memories. When Lil remembers lovingly taking out the Christmas ornaments to decorate the tree, or how being alone in her dance studio reminded her of her mother, although these memories belong to Lil, they bring to mind our own memories.

Through Frank and Lil, we see how marriage can be difficult, and through Shelley we see how tough it is to be a single parent with a child who others see as an outsider.

Hieroglyphics is the kind of book that sneaks up on you. As you read, you are drawn into Lil, Frank and Shelley's interior worlds, and you find yourself feeling as if you know these characters on a  deeper level. As McCorkle writes, "A story is easier to fall into than your own life." I highly recommend Hieroglyphics.

Thanks to Algonquin Books for putting me on Jill McCorkle's tour.