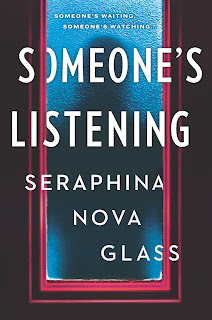 Seraphina Nova Glass' novel, Someone's Listening, is for readers who like to sift through clues and multiple possible suspects as to whodunnit.

The novel opens with psychologist and successful talk radio host Dr. Faith Finley celebrating the publication of her book, Someone's Listening. The book is a guide for women who want to escape from the clutches of domestic violence and predatory people bent on doing them harm.

It should be a happy occasion, but there are clues that something is amiss. Her loving husband, respected newspaper restaurant critic Liam, seems angry, and people at the party appear to want to avoid Faith, not celebrate her success.

On the way home from the party, a truck veers right at them while Faith is driving, and she wakes up to EMTs strapping her to a gurney. She calls out for Liam, but there is no response.

As she comes to in the hospital, she asks for her husband, but the police officer in her room tells her that there was no one else in the car or anywhere near the scene. This confuses and upsets Faith.

Liam's body is not found, but it is discovered that he withdrew $6000 from their bank account and his passport is missing. Why would Liam leave? Is it because one of her former clients accused her of having an inappropriate relationship?

Faith is about to lose everything, and with her back against the wall, she begins to investigate what happened to her husband. She also starts receiving threatening notes, passages cut out from her book. Who is trying to ruin her life?  There are plenty of suspects, and a careful reader may be able to suss out a guess at who did it and why.

Glass does a terrific job setting a scene, painting a visual picture for the reader. "The Sunday newspaper, in its plastic sheath, lies at the end of the driveway, half of it immersed in a puddle from last night's rain."

If you enjoy a psychological thriller where you can exercise your skills at detection, Someone's Listening is for you. Fans of the Lifetime channel movies will enjoy it as well.

Thanks to Harlequin for putting me on their Mystery & Thriller Summer Reads Blog Tour.