Rules of the Road by Ciara Geraghty 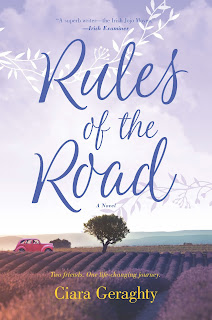 In Ciara Geragthy's novel, Rules of the Road, Terry is having a difficult day. Her father's nursing home calls her to tell her they must fumigate the home so Terry has to take her father, who has dementia, home for few days.

Terry wants to deliver a birthday cake to her best friend Iris who is at a yoga retreat. When she calls the retreat, they tell her that Iris is not there and hasn't made a reservation. Worried, Terry goes to Iris' home and discovers that Iris is getting on a ferry from Dublin to England, and she plans to go to a clinic in Switzerland where she will end her life.

Iris has MS, and although she is doing fairly well other than using crutches to get around, she fears what the future holds for her. Terry has 90 minutes to get to the ferry and find Iris, so she brings her father along.

Unable to convince Iris to come home, Terry and her father get on the ferry and go with Iris to London. Terry has to keep an eye on her father so he doesn't wander off, and make sure that Iris doesn't abandon them until she can talk her out of going to the clinic.

Terry is a caretaker. She takes care of her home, her husband, and her two grown daughters, all of whom seem to depend on Terry to keep them going. It is out of character for Terry to just up and leave like this, and her family lets her know that.

Iris figures if Terry wants to tag along, then fine. Terry conquers her fear of driving in a big city, and the three set off on an adventure. She does her best to convince Iris that life is worth living, and hopes that Iris will eventually change her mind.

I enjoyed their time in France, where Terry has to save the day when their car breaks down. They end up at a mysterious castle B&B, where they meet the owner, whom Iris takes a shine to.

This road trip allows Terry to grow as person in her own right, be seen as not just as a daughter, wife and mother.  Her friendship with Iris also grows on the trip, as they come to a better understanding with each other.

One thing I found humorous was Terry's laundry observations. She knows how to get a stain out of anything. The observations about a long time married couple (Terry and her husband) were also particularly keen. Terry's tender loving care of her father is something that many people will also be able to relate too. It saddens her to watch her father fade away.

Rules of the Road is a buddy road trip story, with a dash of Jojo Moyes Me Before You. Watching Terry break out of her shell thanks to her friendship with Iris is something joyful. I enthusiastically recommend Rules of the Road.

Thanks to Harlequin for putting me on their Summer Reads Blog Tour.