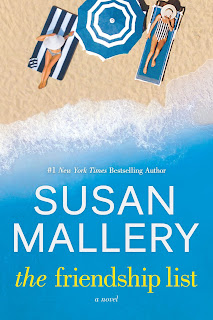 From the title of Susan Mallery's new novel, The Friendship List, you would assume that a friendship plays the major role in the book. And while Ellen and her best friend Unity's friendship is important, there are some very sexy scenes that will have readers reaching for a cold drink to cool down.
Ellen is a high school English teacher and single mom to Cooper, 17 years old and a football player. For all their lives, it's just been Ellen and Cooper, as Ellen got pregnant in high school and never had a relationship with Cooper's father beyond the one night.
Her best friend since childhood is Unity, who lost her parents in a car accident when she was a teenager. Unity married her high school boyfriend whose career in the military meant they moved around a lot. When he was killed in action three years ago, Unity's life fell apart and she has yet to recover.
Both Ellen and Unity don't have a lot of experience with dating, and their friendship has been the cornerstone of the life. It's also kept them from experiences that many adult women have had.
When Ellen discovers that Cooper is reluctant to go away to college as they had planned, it is because he is fearful of leaving his mom alone. She overhears him tell a friend that he believes she depends on him for everything, and he just can't go.
This spurs Ellen to join with Unity and create the Friendship List. On this list are things the women plan to do to expand their horizons. There are things like skydiving, rock climbing, getting a tattoo, and having sex with a hot guy on the list. The first one to complete the list gets treated to a spa day by the other one.
Ellen's other good friend is Keith, the high school football coach. They have dinner together frequently, and have never thought of each other as anything more than friends. Ellen is traveling with Keith, Cooper and some football players on a college tour trip. She decides that it will be the perfect time to show her son that she has a life of her own.
She gets a tattoo, and buys a sexy outfit to wear to dinner with Keith. Ellen's lack of experience does not dampen her enthusiasm for sex, and the scenes where she inadvertently tortures poor Keith are amusing and sexy. The dialogue between the two is witty, even laugh-out-loud funny.
Meanwhile, Unity's older friend Dagmar sets her up on a date with her nephew Thaddeus. Thaddeus is a wealthy entrepreneur and former stripper (how is that for a double whammy?) who is tired of the dating scene and looking for "the one".
But Unity cannot  move on with her life after the death of her husband three years prior. She works as a handywoman, with a large clientele at the local senior living complex. For fun she plays in the senior pickleball league (even though she is only 34), and she still attends a weekly grief support group.
Can Ellen and Unity shed their fears and move forward with life? You'll have to read this delightful story, The Friendship List, to find out. I read it in one day, and it moved me (Unity's heartbreaking sadness)
and made me smile (Ellen's curiosity about sex) in equal measures.
If you are looking for a terrific story that has female friendship and steamy sex scenes, put The Frienship List on your TBR list. It's a great summer read.
Thanks to Harlequin for putting me on Susan Mallery's blog tour.