Confessions on the 7:45 by Lisa Unger 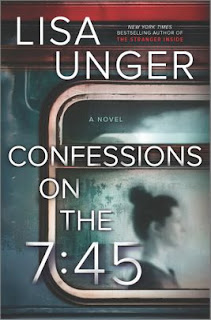 Sometimes you just need a good, twisty psychological thriller to sink your teeth into. Lisa Unger's new novel, Confessions on the 7:45, fits that bill.
Selena is running late at work. She likes to be on the early train home so that she can have dinner with her husband and two young sons, but tonight she called home to say she would be on a later train. A sinking feeling made Selena put a camera in her children's playroom where she caught her nanny Geneva and husband having sex while the boys were in the other room watching television. And this was the second time she caught them.
She gets on the train and finds a seat next a young woman Martha, who befriends Selena and makes a confession - she is having an affair with her boss, who is married to the CEO of the company. After a few drinks, Selena confesses her tale of the nanny and her husband. Martha wistfully wonders what if they could solve each other's problems? Selena finds that disturbing, but she'll never see Martha again, even though Martha pushes Selena to exchange phone numbers.
When Selena returns home, she confronts her husband who swears it was just the one time, and he is sorry, but Selena knows better. She is devastated because she really liked Geneva, she was wonderful with the boys and kept the house organized.
Before Selena had a chance to fire Geneva, she disappears the night Selena confronts her husband. The police show up after Geneva's sister calls them, and Geneva doesn't show up for work the next day. Selena doesn't tell the police that her husband was having an affair with Geneva, and the tension ratchets up as the lies continue.
There is another story we get entangled with- a young woman named Pearl lives with her mother, a woman who owns a failing bookstore and has relationships with many men. Who is Pearl and how does she figure into the main story?
Unger has a lot of balls to juggle to keep the story moving and connected, and she does it expertly. With a nod to the classic Hitchcock movie, Strangers on a Train, we wonder what happened to Geneva and does Martha have anything to do with it?  Mystery/thriller fans who like to put their deductive skills to the test will enjoy trying to untangle all the knots of this intriguing story.
Thanks to Harlequin Books for putting me on their Fall Mystery Reads Tour.