Rescue You by Elysia Whisler 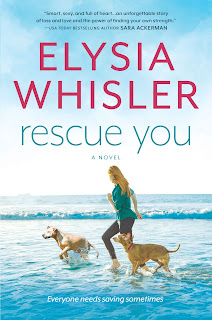 Elysia Whisler's novel Rescue You opens with massage therapist Constance slamming on her van brakes to avoid hitting a dog. She gets out of the van and manages to coax the lost dog, who was in bad shape and had recently given birth, to eat a biscuit.
She followed the dog who led her to newborn puppies in an abandoned house. Constance wasn't sure if the dog was a stray or from a nearby overcrowded and dirty puppy mill, run by Janice, an awful woman. She managed to get all the sick, dirty puppies and mom in her van and took them to her sister Sunny's dog rescue home, Pittie's Place.
Sunny has been trying for years to get the puppy mill shut down, and along with childhood friend Pete, (who owns Canine Warriors training dogs as pets for veterans) has snuck onto Janice's property to rescue dogs on their own. Janice looks at it as stealing, as does Detective Callahan of the local police department.
After Constance helps Callahan with a stiff neck, he asks her to help his buddy Rhett, a former Marine who suffered a bad leg injury and PTSD. Rhett owns a weight training gym, Semper Fit, for people who are serious about their training.
Constance has had a rough few years- she cared for her late father through an
illness, and her husband left her. She used to be a runner, but these last few years she hasn't kept herself in shape. Sunny offers her a place in her spin classes, but one day Constance finds herself in front of Semper Fit and goes in.
Rhett is intrigued by Constance, and impressed by her determination and work ethic. They circle around each other, and eventually Rhett takes her on as a client and they become friends- maybe even more.
Rescue Me is the perfect novel for anyone who loves dogs (especially pit bulls) and takes their exercise training seriously. (I know more than a few of those people.) We are introduced to a cast of characters in an interesting settings of the world of dog rescue and weight training. If you spend a lot of time in the gym, you will get this wonderful novel on an entirely other level.
It's the first novel in Dogwood County, a new series, and the characters win you over in such a way that you look forward with great anticipation to the next installment and get to know some of the other characters better. The Christmas gala party at Pittie's Place was so vivid, I felt like I was a guest at the party. I hope I get invited next year.
Thank you to Harlequin Books for putting me on their Fall Reads tour.