The Cold Millions by Jess Walter 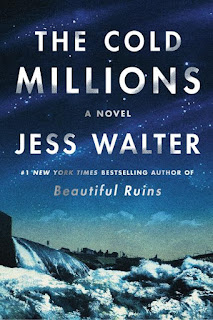 One of the books I always recommend is Jess Walters' novel Beautiful Ruins. Set in 1962, it tells the story of a young man working to keep his family inn open on the beautiful Italian coast of the Ligurian Sea. He dreams of Hollywood, and when an American movie star shows up in a boat, their lives become intertwined. It's one of the most perfectly constructed novels I have ever read.
His latest novel, The Cold Millions, drops the reader into 1909 Spokane, Washington where many lives converge. Gig and Ryan Dolan are young Irish immigrants who hop trains and try to find any kind of job they can. They come up against job agencies who take financial advantage of men like the Dolans, police who don't like these "bums" sleeping outside, and uber-wealthy businessmen, like mine owner Lemuel Brand, who uses his money to take every advantage he can to stay powerful.
Tired of being taken advantage of, Gig gets involved with union organizers and gets thrown in jail, along with 500 other men, after a big protest. Ryan turns to famed union speaker Elizabeth Gurley Flynn to help him get his brother out of jail. Flynn sees that she can use young Ryan to gain sympathy and money for the cause of protecting and promoting the union.
Ryan also turns to vaudeville performer Ursula, who is romantically involved with both Gig and Lemuel Brand. Brand is a man who uses everyone in his orbit, pitting people against each other, having loyalty to none.
Once again, Walters' carefully constructs a fascinating world, again weaving real people into his fictional narrative (Elizabeth Taylor and Richard Burton were in Beautiful Ruins), like Flynn and labor lawyer Fred Moore. I loved the sibling relationship between Gig and Ryan, it felt so grounded in reality. The dichotomy of Ursula using her femininity to get what she wanted, while Elizabeth Gurley Flynn was  harangued because she "acted more like a man" works so well here.
One might think that reading about union organizing in 1909 has no resonance in 2020, but as I was reading, all I could think was wow, these things are still happening today. Wealthy men want to control society to benefit themselves only, women who don't act in a matter that is considered docile are ridiculed, people at the bottom of the economic rung are scorned, and eventually when people have had enough, they will protest against injustice.
The Cold Millions is a brilliant book to get lost in, that makes you think that maybe we will make it out of these troubled times as apparently they have always been with us in one form or another. I give Cold Millions my highest recommendation.