Welcome to the Friday 5ive, a weekly blog post featuring five things that caught my attention this week.
1) On Saturday and Sunday there was a loud band playing on the roof of Sotheby's Art Auction House, which is one block down the street from us. The band played both days from 11am-5pm with very few breaks. I don't mind music, but this was so loud, and there is a hospital and a nursing home directly across the street from Sotheby's. I don't know what was going on, but there was a statue of a horse outside the entrance and a person in some sort of costume to match. 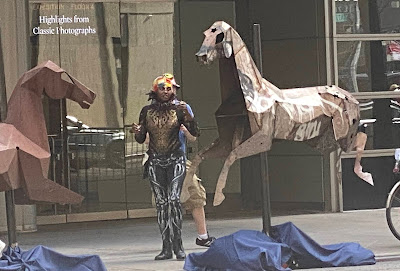 2) Speaking of art, at the Book Cellar, the used bookstore where I volunteer, one of our customers created an art piece that she put up on Instagram. We all loved it, and the artist florabai, gave us a print to put up in the store. We were all very touched by her tribute to our little shop. (You can see more of her art if you click on her name above.) 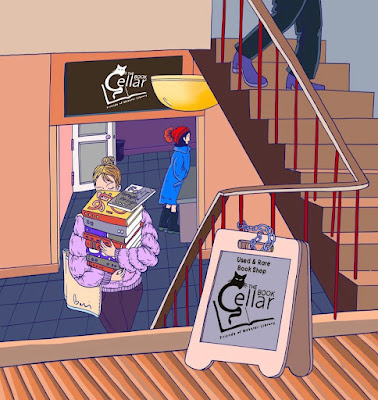 3) If you are a True Crime podcast fan, give a listen to Finding Lauren, about the disappearance in 2011 of Indiana University student Lauren Spierer.  Lauren disappeared after a night out drinking with friends, and there is still no answer to what happened to her. Host and producer Kyra Breslin was a student at IU in 2012, and as a former student she shares a unique perspective that elevates this podcast. She puts you right on the campus where Lauren was last seen. 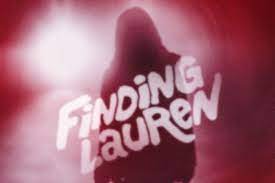 4) Speaking of true crime podcasts, I'm enjoying the Hulu series, Only Murders in the Building, about three people who live in a fancy New York City apartment building near Central Park who are addicted to true crime podcasts. When a tenant in the building is foudn dead, they create their own true crime podcast to discover who murdered the young man. Steve Martin, Martin Short and Selena Gomez play the trio, and it's a fantastic combination of humor and whodunit. It's fun to spot Broadway vets like Nathan Lane, Jayne Houdyshell and Jackie Hoffman, in the cast as well. 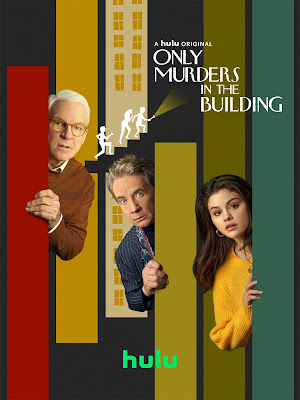 5) I read two books this week. Billie Jean King's autobiography (written with Johnette Howard and Maryanne Vollners), All In, tells the story of her life, starting with her love of tennis as a child, through her rising up the tennis ranks to become the number one player in the world, through her longtime marriage to her husband and business partner, to her coming out as a lesbian when she is 51. All the tennis highlights are here- her Wimbeldon wins, the Battle of the Sexes match against Bobby Riggs- as well as her decades long fight for equality for women's tennis. She's accomplished so much in her life, and she doesn't shy away from her faults on and off the tennis court. This one is a must-read. 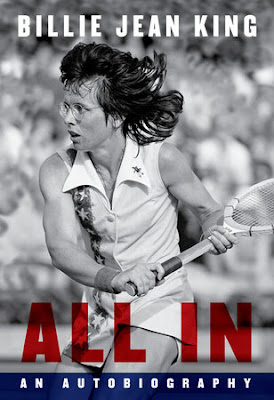 Tara Laskowski's The Mother Next Door is a timely October read. Set around a Halloween celebration in a suburban cul-du-sac where a group of moms called The Ivy Five, led by their Queen Bee Kendra, as they welcome a new mom to their select team- the new high school principal's wife Theresa. Someone is stalking the Ivy Five moms, and Theresa is hiding her connection to the town and a secret from her husband. It's a real page-turner, and I stayed up late finishing this one to see how it would end. Fans of Liane Moriarty's Big Little Lies will like this one. My full review publishes here on Tuesday. 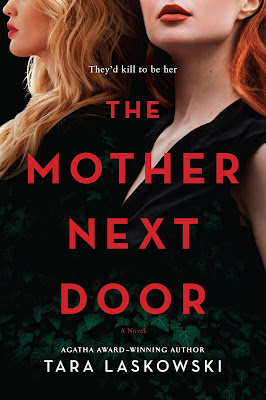 Stay safe and healthy everyone, until next time.