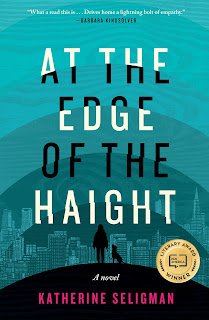 One of the many consequences of this pandemic is that is has brought to the forefront hidden problems like hunger and homelessness. People who were living on the edge found themselves for the first time visiting food pantries to feed their families, and turning to charitable agencies to help them pay rent.
Katherine Seligman's novel, At the Edge of the Haight, shines a light on the problem of homeless young people in San Francisco. As we meet Mad, she is chasing her dog Root who has run off into the underbrush of the park where she and her friends spend most of their day.
Root and Mad stumble upon a young man in the throes of death, and a man standing over him who threatens Mad. Mad runs, fearful for her life.  Mad's father left her when she was just a child, and her mother suffered a psychotic break a few years later. She went to live with relatives in a foster care situation, and left as soon as she could.
She ran to San Francisco and found other young people like her- running away from bad situations at home, many who aged out the foster care system with no support or place to go. Mad and her friends sometimes spend the nights in shelter, where they have to be in by 8pm and out by 8am. She goes to the public library, or hangs out in the park during the day.
In addition to the everyday stresses of homelessness- where to get food and money, clean clothes, avoiding the police- Mad now has to avoid the man who killed the young man. The young man's father, Dave, comes around looking for answers to what happened to his son. Dave and his wife want to help Mad out, but they make Mad uncomfortable.
We learn so much about life on the streets in this powerful novel. The scene where Mad and her friend Ash get soaked waiting out a rainstorm in a doorway overnight rather than spend the night in a dangerous shelter is so vivid you can feel the shivering rain on your own skin as you read it.
There are people who are kind to these kids- a librarian who gives Mad paper, envelopes and stamps to write letters, store keepers who let them hang out, people who work in the shelters who try to help them get assistance. There are also people who are not kind, like the gang of thugs who regularly take Mad and her friends' food and money as a toll payment. The people (some with their young children) who want to take photos with the "hippies" made me cringe, as if these young people are tourist attractions.
One thing that caught my attention was something that Mad's mother said- "You can't judge people because you just never know why they do what they do." That line resonated for me.
At the Edge of the Haight won the 2019 Pen/Bellwether Prize for Socially Engaged Fiction, a prize initiated by author Barbara Kingsolver, one of my favorite authors. Good fiction makes people more empathetic, and At the Edge of the Haight made me look at homeless people in a more compassionate light. We can all use a little more compassion these days. I highly recommend At the Edge of the Haight, it's remarkable and enlightening.
Thanks to Algonquin Books for putting me on Katherine Seligman's book tour.