Irena's Vow is a must-see play 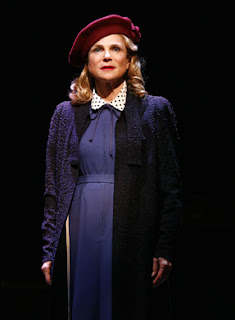 During Holy Week/Passover, I saw Irena's Vow on Broadway. It's the true story of a young Catholic Polish woman who hid 13 Jews in the basement of a Nazi major's house where she was a housekeeper during World War II. If you come to NYC, you MUST see this play!
Tovah Feldshuh plays Irena, and she is so remarkable, she makes you believe that she is that young woman. She is a lock for a Tony nomination.
It's a great play for high schoolers to see, I hope that it tours throughout the country.It really drives home the point that one person can make a difference, even if she is young. An interesting conflict arises that calls into question Irena's dedication to her religion.It makes you think how you would react in the same situation.
The staging adds greatly to the play, and all of the actors are wonderful. It was very moving when the real daughter of Irena comes onstage at the end of the play to answer questions from the audience. Several people, including myself, were moved to tears.
Posted by (Diane) bookchickdi at 9:40 AM