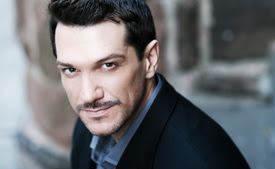 Last night we attended a fundraiser for the New York Philharmonic at Avery Fisher Music Hall in Lincoln Center. Marvin Hamlisch conducted and it was so thrilling.

Joel Gray opened the show with "Wilkommen" from Cabaret, and what a way to start the show. He was delightful. Keep an eye out for fifteen year-old Canadian sensation Nikki Yanofsky, who sang two iconic Ella Fitzgerald songs. She has such poise, and what a voice. Forget "American Idol", this girl blows them away.

Audience favorite Paulo Szot got a standing ovation for his rendition of "This Nearly Was Mine", his signature song from "South Pacific". (photo above) He owns that song now, and he was perfection. His co-star, Kelli O'Hara, who makes pregnancy look so beautiful, sang two songs and then joined Paulo for a duet of Rogers and Hammerstein's "If I Loved You" from "Carousel". They are so wonderful together.

Jennifer Holliday rocked the house with her "And I Am Telling You I'm Not Going" from "Dreamgirls". Twenty-eight years later, she still has the audience in her thrall. Amazing!

London stage sensation Maria Friedman was up next, and then Mary Poppins herself, Ashley Brown blew the roof off with her rousing rendition of "I Happen to Like New York"; I think that was my favorite performance of the evening.

And no New York Moments performance would be complete without Liza Minnelli singing "New York, New York". She never disappoints. I met her at CD signing a few months ago, and she looks and sounds better than she has in years.

The Philharmonic played a Jerome Kern medley and Hamlisch finished with "The Way We Were". It was a phenomenal night of music and I got goosebumps several times listening to these gorgeous voices.
Posted by (Diane) bookchickdi at 9:15 AM