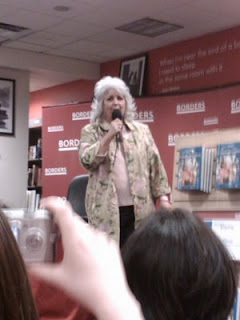 Last week, I went to see Paula Deen at Borders Columbus Circle, promoting The Deen Family Cookbook. There were over 150 people there, and the most interesting thing is that so many people brought her gifts! I've been to quite a few book signings, but I've never seen that many gifts given. (At Joy Behar's book signing a few weeks ago, a man who owned a lingerie company brought Joy a bra and panty set, which was kinda weird, but Joy was very nice to him, even though I think she thought it was odd too.)
People gave her flowers, children brought cards they made, and more than one person gave her food that they cooked. She was so gracious to them all. I loved her outfit- a silk green/gold long jacket with pink embroidered flowers over a pale pink tank, with dark denim slacks and gold ballet flats. So stylish!
Her husband Michael was there, she called him Pe-Paw (must be what the grandson calls him). They were quite the comedy act and had everyone in stitches. Poor Paula has a nasty eye infection, but she gamely stayed over an hour, just her and Michael talking, answering questions, giving realistic advice to people who want to open their own restaurant.
I have an extra signed book from her for sale on Amazon.com- look for collectibles- I am spl1768. The recipes look delicious. One of my boys new favorites is Bobby Deen's Goulash, I made it for our family vacation week in Delaware last year.
Posted by (Diane) bookchickdi at 4:08 PM