Celebrity sighting of the day 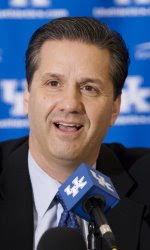 Celebrity sighting of the day: John Calipari, the new coach of the University of Kentucky men's basketball team.
I can't take credit for this one; while wandering in Little Italy on the way to dinner, my husband saw Calipari with who appeared to be two possible recruits. People were asking him to pose for pictures. If I had known that he had just signed an eight year, $31.65 million dollar coaching deal, I would have asked him to pay for our dinner!
Posted by (Diane) bookchickdi at 8:36 PM