Another Real Housewife of NYC 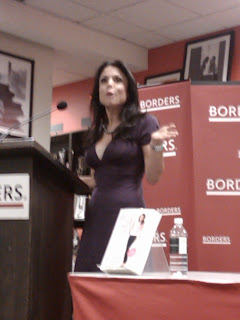 Bethenny Frankel, the best of the Real Housewives of NYC, made an appearance at Borders Columbus Circle on May 5th promoting her new book, Naturally Thin: Unleash Your Skinnygirl and Free Yourself from a Lifetime of Dieting.

She is skinny, but she is so funny you are willing to overlook that. It happened to be the night that the season finale of the show was set to air on BravoTV. She answered questions about her life, did her killer impression of her friend Jill (yes, they are still friends, even after the blowout at the charity party), and gave advice to those seeking to get into the food business.

She promoted her SkinnyGirl cocktails, set to go to market next month and is working on a cookbook as well.

Everybody there was on Team Bethenny, with some people suggesting that Kelly should be bounced from the show, but one gentleman seated next to me stated that he believed the rivalry between the two made good television, and Bethenny has clearly become the fan favorite in that battle.

The party for Time Magazine's 100 Most Influential People was being held at the Time Warner Center, so we got to see some of the red carpet attendees- NBC News Andrea Mitchell, fashion designer Stella McCartney with Liv Tyler and Kate Hudson who both looked gorgeous, and JJ Abrams, creator of my favorite TV show, Lost. No Oprah or Michele Obama, though.

Just another night in NYC- special shout-out to Rick and Alex for keeping me company that evening.
Posted by (Diane) bookchickdi at 7:46 PM