Swine flu has nothing on the superplague 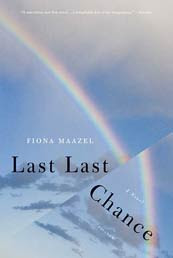 With the news filled with talk of the swine flu, Fiona Maazel's debut novel Last Last Chance, and its storyline of the release of a superplague, seems prescient.

Lucy is a thirty-year-old drug addict with six failed rehab stints behind her. Her mother is a wealthy business owner and crack addict, her twelve-year-old half sister dabbles in disease, cutting herself and fundamental Christianity, and her scientist father committed suicide after a deadly superplague created in the government lab where he worked disappears.

Not exactly a feel-good novel, but one that is brilliantly plotted and written. Maazel states in the author's conversation at the end of the book that she "love(s) the craft of storytelling", and it shows.

She writes sentences that are so amazing, they take your breath away. You simply have to go back and reread and savor them. She states that "every sentence feels like its own universe, and so I think long and hard about how to put that universe together." An example of one of my favorite sentences (and there are many) is "If my mother had a secret life, maybe I could forgive the one she led in front of us."

She also states that Cormac McCarthy is a writer she admires, and while I was reading her book, it put me in mind of him as well, both in the beautifully crafted sentences, and the subject matter of his Pulitzer Prize winning novel, The Road. Whereas The Road is post-apocalyptic, Last Last Chance is pre-apocalyptic, and does have an element of gallows humor to it.

There is so much stuffed into this novel, it almost defies description. Characters who have died and been reincarnated, or are waiting for reincarnation, narrate some chapters. This can be confusing at first, but stick with it, and you will be rewarded.

The ravages of drug addiction are compared to the panic and illness of a world plague. The self-absorbed behavior of a drug addict is mirrored by the panic and self preservation that people exhibit when faced with a plague at their doorstep.

The characters are not entirely likeable; indeed it is hard to feel sympathy for people who have much, but still fall into drug (and self) abuse. Yet the author gets you to root for these people. Lucy and her mother attend a drug rehab in Texas, and in group therapy they hear the heartbreaking stories of how some of their fellow residents became drug addicts; it is stark contrast to their own lives.

Maazel manages to keep all her balls in the air, with many settings and characters to keep track of and move along. Her characters, and there are many, seem fully realized, and though you know them well, you leave wanting to know even more about them.

This is a big novel, with much to contemplate and savor. It is a book that does not grab one right away, but once involved, it is something you cannot put down. If you are willing to commit to it, you will be richly rewarded. I highly recommend it and look forward to Maazels' next effort.
Rating 4.5 of 5 stars
Posted by (Diane) bookchickdi at 4:44 PM