I'm Sorry You Feel That Way 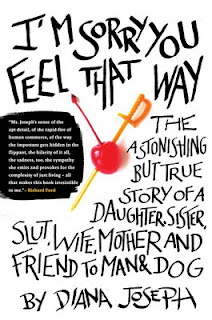 is the catchy title of Diana Joseph's book of essays about her life. Subtitled The Astonishing But True Story of a Daughter, Sister, Slut, Wife, Mother, and Friend to Man and Dog, Joseph recounts incidents from her life that made her the woman she is.

The book is an honest, funny and touching look at Diana's life. Her father, a man who preferred to be sans shirt most of the time, gave his twelve-year-old daughter some advice on boys: "Don't be a pig". Translation: Don't be a slut. She didn't take his advice, and frequently her choices in men were questionable.

She calls her now-teenage son 'the boy', and her description of raising a son mostly on her own reminded me of Anne LaMott's writing on the same topic. Single moms trying everyday to do their best, but struggling with not having enough money, exhaustion, depression and loneliness. She is not a martyr, just a human being.

Joseph is remarkably honest in her assessment of herself and others, and that is the strength of her book. She has the ability to see the good and bad that exists in all of us, and expresses that in her unique way.

The last essay of the book, 'Ten Million, At Least', is the most moving. Joseph lives with literature professor Al, a good guy who loves her and her boy. They love each other, but they also have their differences, which makes it difficult at times to cohabitate. If you don't tear up at the last two pages, you simply aren't human.

Diana Joseph has spent much of her life around men- her dad, her brothers, lovers, and her son- and that has colored the way she sees the world. Her book is an honest look at how a modern woman deals with bad habits, depression, sex, love, crummy jobs, poverty, pets, loneliness, rock and roll and family. It's humorous and moving, just like life. If you are a fan of David Sedaris and Sarah Vowell, add Diana Joseph to your reading list.