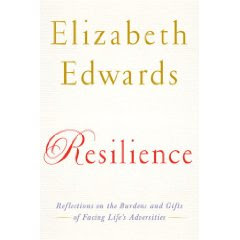 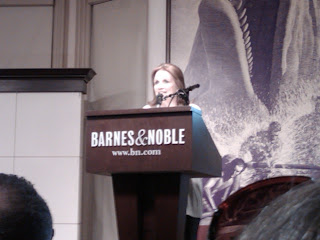 After seeing Elizabeth Edwards on Oprah, the View, etc., I was curious to hear her speak at a book signing for her new book, Resilience: Reflections on the Burdens and Gifts of Facing Life's Adversities.

All any of the media wanted to talk about was the betrayal of her husband and how Elizabeth was dealing with it. The interviews were awkward, and she clearly did not wish to speak about that part of her life.

I have to admit, I am puzzled by the hate-filled comments made about her by so-called respectable media people. Her book is so much more than her husband's betrayal, that is but a small part of it. Yet it is all anyone in the media wishes to discuss. Why? She has so much more to say on more important topics.

I was pleasantly surprised after hearing her speak at Barnes & Noble. She was relaxed, and she had a lot to say about her book, which I was able to read while waiting for her arrival.

The book is her personal story about how she was able to cope with some bad things that happened to her. In the middle of her happy, almost charmed life, she lost her sixteen-year-old son in a tragic car accident in 1996. During the 2004 Presidential campaign, where her husband John was the vice-presidential nominee, she found a cancerous lump in her breast. In 2007, her cancer returned and had spread. She was given a terminal diagnosis.

She arrived at the book signing a little late, after having taped The Daily Show with Jon Stewart. She read the first chapter of her book, about her father's stroke in 1990, and then she answered questions from the audience.

The audience was clearly supportive of her, asking interesting questions about her health, her family, and how she coped with the tragedies of her life. She is working with a group to promote health care reform, and given her many experiences with the American health care system, she is more than an expert on the subject.

She is an articulate and thoughtful person. She spoke with each person who wanted a signed book, listened to their stories, and took photos with them. Although she has been on a whirlwind book tour, and had another engagement that evening, she appeared in good health and not fatigued at all.

The book is similiar to her previous book, Saving Graces, a book I read, reviewed and chose as one of my top ten nonfiction books of the year. She covers much of the same territory in this book. It is not so much an advice book, it is more a record of how she dealt with her tragedies, and perhaps the coping mechanisms she used can be helpful to others.

The pain of losing her son is palpable on those pages, every parent's nightmare. While reading her story, one can't help but think, how would I deal with it? She coped with father's death, and her mother's Alzheimer's, something many baby boomers also face.

Reading Resilience, one is able to credit Elizabeth for making her way through the pain and sadness, and it also gives hope that if she can make it through her tragedies, maybe there is hope for all of us. It's a good book to give to someone who is hurting.