Elegy for Eddie- A Maisie Dobbs Novel by Jacqueline Winspear 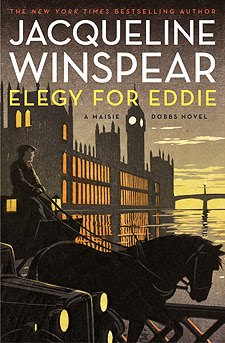 The BBC's Downton Abbey caused quite a stir (I myself was late to the party, watching both seasons on two marathon weekends), and increased interest in the post-WWI world in Great Britain. But readers have for years been immersing themselves in the same era with author Jacqueline Winspear's fascinating Maisie Dobbs' novels, set in London at the same time.

Maisie was a young maid in Lord and Lady Compton's home (think Anna from Downton) who was caught by Lady Rowan in the library late at night reading. Lady Rowan realized Maisie's intelligence and potential and arranged for her to be schooled by Dr. Maurice Blanche, a well-renowned psychologist and private investigator.

Maurice became Maisie's mentor, and Maisie was able to rise above her station and eventually became a nurse serving in France during WWI. Maisie was severely wounded and returned home to recuperate, and eventually take over Maurice's private investigation business.

After Maurice died, he left his home and much of his fortune to Maisie. Overnight, she became a wealthy woman. She also fell in love with Lady Rowan's son and heir, James Compton. Maisie is a woman who owns her own business, has enough wealth to own a home and an apartment in London, and is able to financially help her friends and colleagues.

In the newest novel, Elegy For Eddie, Maisie is visited by men she knew as a child, fruit peddlers from Lambeth. They ask her to investigate the death of Eddie, a forty-six-year-old man with the mind of a child. Eddie had a job running errands for workers in a newspaper plant and was killed when a bolt of paper crushed him.

Maisie knew Eddie and the single mother who raised him. She took the case, and it brought forth many feelings to the surface for her. The class system in England was fairly rigid, and it was unusual for anyone, particularly a woman on her own, to move up. Maisie was living a life about which she felt increasingly uncomfortable.

When she stays at James' family estate, she doesn't like the staff waiting on her. Ringing a bell for the next course of dinner feels unnatural to her. While she loves James, she begins to feel that the life he leads is not one she wants.

Now that Maisie has money, she uses it to help her employees. She purchases a home in a good neighborhood and rents it to her loyal assistant Billy and his family after they lost a daughter to illness. She hired Sandra, who lost her husband, and let her move in with her. She also paid for Sandra to further her education.

When Billy is seriously injured investigating Eddie's death, Billy's wife blames Maisie for putting her husband in danger. Maisie feels guilty, arranges for Sandra to help care for Billy's children, and gets him the best medical care.

A doctor confronts Maisie about her 'helping' her employees. She asks Maisie to consider whether her help is "affecting their lives, making decisions on their behalf that they might not have made for themselves, or might come to at a different time." She suggest that Maisie may have been trying to get others conform to Maisie's view of the world.

Maisie's best friend Priscilla tells her that by coming to the rescue of everyone, she could be causing people to resent her, as Billy's wife does. She explains that people don't like being beholden to someone, and that Maisie is depriving her friends of the "opportunity for them to be proud of something they've achieved.''

This book in the series doesn't have much action, it is much more introspective. We see Maisie coming to a fork in the road of her life. She has to decide whether she wants to move forward with her relationship with James, and how to deal with her new station in life and her control issues.

Maisie is an independent woman living in a turbulent time. This story is set in 1933, and England, weary from the losses of so many men in WWI, is now facing the possibility of another war. Hitler is causing problems in Europe, and Eddie's death may be tied to a newspaper publisher who is using his power to drum up war propaganda to get the people of England ready for confrontation.

I love being immersed in Maisie's world. Winspear does meticulous research, which is available on her website.( If you want to know more about that time in history, click on the link.) Maisie is a strong woman, but she has her doubts about her abilities and where she is going in life. She feels so real and I think many women today can relate to her.

I always look forward to catching up with Maisie, and if you are a fan of Downton Abbey and are suffering from withdrawal, the Maisie Dobbs series are a wonderful way to immerse yourself in that time.

I have reviewed all of the Maisie Dobbs books during last year's Mad for Maisie readalong on BookClubGirl.com;  the links are below:
Maisie Dobbs
Birds of a Feather
Pardonable Lies
Messenger of Truth
An Incomplete Revenge
Among the Mad
The Mapping of Love and Death
A Lesson In Secrets

Thanks to TLC Book Tours for including me on their March is Maisie Month tour!

Posted by (Diane) bookchickdi at 1:00 AM