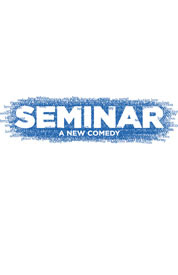 Playwright Theresa Rebeck, creator of TV's Smash has a new play on Broadway titled Seminar, and like Smash, it examines the angst of artistry and what it takes to be successful, this time in the field of writing.


Alan Richman plays Leonard, a once-famous writer who holds a seminar for four students in the apartment of one of the women. Most people know Richman from the Harry Potter movies, but I know him from my favorite Christmas movie, Love, Actually. I was excited to see him on stage and he does not disappoint. He owns every scene he is in, and he is very funny.

He spends much of his time name-dropping famous writers and dangerous places he has been, alternating that with his evisceration of his students' writing, ignoring them or hitting on the women. He plays this role to the hilt, breezing in and out of scenes, leaving decimation in his wake. There is talk of a Tony nomination, and I wouldn't be surprised if he got it.

Lily Rabe is brilliant as  Kate, a woman from a wealthy family who can't believe that Leonard doesn't like her writing. She is one of the best actresses working today, and I was happy to hear that she will be working again on TV's American Horror Story. I first saw her on stage in  The American Plan in 2009, and I knew then that she would be working steadily.

Hamish Linklater, whom most people know as Julia Louis-Dreyfus' neurotic brother Matthew on TV's The New Adventures of Old Christine, plays Martin in his Broadway debut, who is frustrated in his affection for Kate and lacks confidence in his writing ability. There is a little bit of Matthew in this performance, which is spot-on. He has a tense scene at the end of the show with Richman, and he more than holds his own with the veteran actor.

Jerry O'Connell portrays the super confident and annoying Douglas in his Broadway debut and he does just fine in a role well suited to his charms. Hettienne Park ably plays Izzy, a girl with few inhibitions and a zest for life and lust.

The play is funny, sexy and empathetic to the creative process. Linklater and Richman are leaving the show on April 1, so you should hurry to see some fine acting. I got my ticket at the TKTS booth, and it was  more than worth the price.

Posted by (Diane) bookchickdi at 2:36 PM