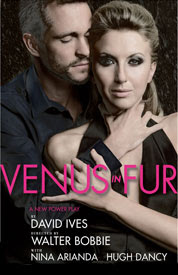 I have seen actress Nina Arianda in a few small but memorable parts, in Woody Allen's Midnight in Paris and the Ben Stiller movie Tower Heist. But nothing prepares you for the whirlwind entrance she makes in Broadway's Venus in Fur.


Hugh Dancy portrays a playwright who has written an adaption of a German novel, Venus in Furs. The story is about a man who dreams he is talking to the goddess Venus about his attraction to cruel women. The play opens as he is lamenting that he cannot find an actress to play the lead role in his play. The young actresses are to ignorant and selfish, the older actresses not beautiful enough.

Then Arianda barrels through the door, claiming she has an audition. You cannot take your eyes off her (and not just because she spends most of the time dressed in a corset and thigh-highs) from the time she enters the scene until the end of the play. She originated the role off-Broadway and resumed the role when it moved to Broadway. Last year she was nominated for a Tony for her role in Born Yesterday.


She claims her name is Vanda, the same unusual name as the character. She claims she hasn't read the play, yet she knows all of the dialogue. She acts like the selfish, oblivious young actresses that Dancy was complaining about, but it is clear that she is hiding something.

As the two read scenes from the play, we see that something else is going on. Who exactly is Vanda and where did she come from? She forces the playwright to face the real reason he wrote the play, to face what he is hiding about himself.

Arianda is nothing short of brilliant in this play; woe to any actress who plays the role after her. It is a two-character play, so the other actor must be strong to avoid being wiped off the stage by Arianda. Hugh Dancy amazed me; I have never seen him in anything and I will definitely look for him again.

There are at least two powerful scenes that leave the audience holding their breath as their jaws dropped; the theater was as silent as an empty church. Director Walter Bobbie does a wonderful job with this show.

When the play ended, I listened to people debating exactly what was going on in the play. One thing that wasn't debated- Nina Arianda is a star, one that may come along once in a generation.

I got a discount ticket to the show, but this is a play I would play full-price to see. This play is for adults only, as the theme is sexual.

Posted by (Diane) bookchickdi at 5:35 PM