The Gypsy Twist by Frank Hickey 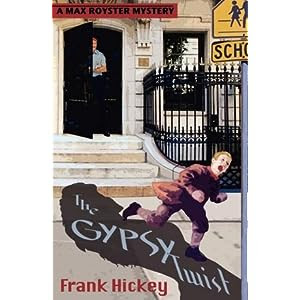 I had the pleasure of attending the book launch party for Frank Hickey's The Gypsy Twist on March 10th at the lovely home of Frank's sister, WPIX news reporter Magee Hickey.

The huge crowd overflowed the apartment as many people came to congratulate Frank on the publication of his Max Royster mystery, the first one in which Frank (among many others) hopes is a series of books starring the quirky, misfit NYPD patrol officer.

Max Royster became an NYPD patrol officer at the advanced age of 42. He is an enigma to many of his fellow officers, as well as to his commanding officers. He enjoys bellowing about wanting cash and spends time at the bar across the street from his precinct house in Flatbush, Brooklyn, where he calls the regulars at the bar the


"Budweiser tribe. The orange-haired, pink-faced Irishers who always wear either bright kelly green or hairy gray tweed. Or football jerseys. Who bellow and stomp around the local saloon like young prize whiteface bulls. Cops. Or priests. Con Edison workers, bus drivers or firemen. Irishers all. When you get older, you grow beautiful heads of silver and white hair. You can always see the tribesmen on St. Paddy's day. Or at Topsy's here, sucking down those Budweisers so that the tribes carries on."


Hickey read that passage at the party and he got a big laugh from the crowd. While reading the book, I could definitely hear Hickey's voice in Max's dialogue, although when I asked him how much of Max is Frank, he demurred, saying "not much."

When a woman asked him who he would like to see play Max in a movie, Hickey replied "Jerry Lewis!" That is something I could hear Max saying. They both have an unorthodox sense of humor.

The storyline revolves around the vicious murder in Central Park of a young boy who attended St. Blaise's School, a private school on the Upper East Side, or as Max calls it, 'the Playpen'. Since Max attended the school as a boy, and knows the feel of the neighborhood, he is brought in to work the case.

Hickey captures the atmosphere of the Upper East Side circa 1995, and the sense of entitlement and secrecy that some of the residents of 'the Playpen' hold. This brutal murderer must be caught before the press and the residents go crazy.

When another boy is brutally murdered in a similar fashion, the police have a serial killer on their hands. Royster is tipped off by a local reporter about a young boy murdered in the same fashion in New Orleans.  Another murder happens in San Francisco. The kicker is that the murderer is believed to be a woman, highly unusual for serial killers.

Hickey does a fabulous job giving his readers the flavor of the cities that Royster visits to uncover the identity of the murderer. We see the seedy underbellies of New Orleans and San Francisco, places where a killer could hide out.

Max goes undercover and without the resources or blessing of the NYPD; he is on his own matching wits with a cunning killer. Hickey is masterful at ratcheting up the tension as Max gets closer to finding the true identity of this barbaric killer.

There is a lot of savage, sudden violence in this book, and readers who cannot stomach that should stay away, but fans of James Patterson's Alex Cross series will want The Gypsy Twist on their bookshelf. Max Royster is a fresh, unique, quirky character in a genre that needs it.

Posted by (Diane) bookchickdi at 3:04 PM