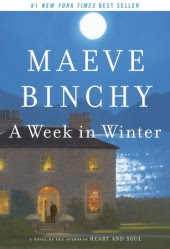 Irish author Maeve Binchy came to the attention of American readers in the 1990s when one of her novels, “Circle of Friends”, was made into a popular movie.  Soon we were all reading her beautifully crafted books of middle-class Irish, usually from the rural areas of Ireland, who often moved to the big city looking for love and a career.

Binchy passed away last year at the age of 72, and her many worldwide fans were saddened to hear of the news. Many of her novels featured recurring characters and settings, and readers lost not only her, but those familiar friends as well.

Her last novel, “A Week in Winter”, is vintage Binchy at her best. We have a large cast of characters, each telling their own stories, as they come together to spend a week in a beautiful Irish hotel set on a dramatic cliffside in the small town of Stonybridge.

Chicky Starr is a young Irish lass living in Stonybridge with her family. She falls in love with Walter, a handsome young man traveling through Ireland who convinces her to leave her family and come with him to America.

Her family is dead set against her doing this, but Chicky is in love. They end up in New York City, but Walter is a wanderer and he soon leaves Chicky stranded alone in a foreign country.

Chicky finds a job and a home at a boarding house where she cooks and cleans. She is too embarrassed to tell her family what has happened to her, so she tells them that Walter and she were married, but he has died in a car crash.

Eventually she decides to go back home to Stonybridge, and with the money she has saved over the years buys a large Irish home and turns it into a hotel. Her family believes she will fail, but Queenie, the elderly woman who owns the castle-like home, casts her lot with Chicky and they begin to make it a reality.

Rigger was a young man born out of wedlock to Nuala, who left Stonybridge to work in Dublin. He fell in with a bad crowd and got into trouble. Nuala sent him to Stonybridge to work with Chicky, and there he changed his ways, fell in love and became Chicky’s right-hand man.

As the hotel prepares to open, we meet the first week’s guests. Each guest gets their own chapter to tell their own story, and this is vintage Binchy. We even see some characters from our favorite Binchy books, like the Signora from “Evening Class”, and some of our favorite places, such as Quentin’s restaurant and Whitethorn Woods, make cameos. It will bring a smile of recognition to regular Binchy readers.

There are many interesting stories here, including Winnie,’s, a thirty-something unmarried nurse. After giving up hope, she finds love with a wonderful man. The only problem with him: he has an unusually close relationship with his mother, Lillian.

Winnie tries to engage with Lillian, but it is clear that Lillian won’t approve of any woman her son dates. Winnie arranges for a romantic week away with her man, but it ends up he cannot go due to a work commitment, and suggests that Winnie takes his mother instead. It doesn’t look like a promising week.

Freda is a young librarian who loves her job but hasn’t been lucky in the love department. She meets a man whom her best friend and aunt have their doubts about, and soon Freda is abandoning her work and friends for this man. Freda also has a secret; she has visions of things to come.

There is a husband and wife doctor team who have seen some sad and troubling things and long to have a baby. An aging American actor is (he thinks) incognito, but everyone recognizes him. An older couple who spends their free time entering sweepstakes wish they had won the first place trip to Paris instead of the second prize of a trip to Ireland. A hard-working Swedish man loves music and has doubts about taking over his father’s business.

All of these people converge at Chicky’s hotel for a week in winter. We get to know them- their longings, their fears, their hopes, their sadness, and their joys. Binchy is a master at showing us their humanity and making us care about them. The reader identifies with something about each of them.

Binchy tells universal stories about people we know, people we are. They strive to have better lives, work hard and long for true love. She sets these stories in her beloved Ireland, and we learn a little bit about life in the Emerald Isle.

If you are a fan of Maeve Binchy, “A Week in Winter” is not to be missed, even though she most certainly will be.