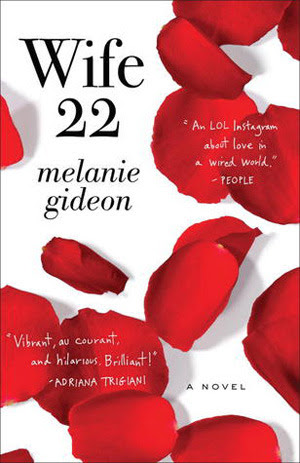 Alice Buckle is a middle-aged wife and mother of a teenage daughter and twelve-year-old son. Her husband works in advertising, and she is a part-time elementary drama teacher. On the outside, everything seems good, but the facade soon starts to crack.

Her husband William loses his job, and their relationship has been strained of late. She thinks that her daughter may have an eating disorder and she believes her son is gay but he just doesn't know it.

One day she gets an email request to join a research project about 21st century marriage.  She has to answer a series of questions about how she met husband, fell in love and about their subsequent relationship. Alice begins to develop a on-line relationship with her researcher, and they eventually begin talking on Facebook (with fake profiles) and agree to meet.

The novel is novel in that much of it consists of email messages between Alice and her researcher, and uses Facebook status updates to convey some of the story. We get to know some of Alice's friends and family through the Facebook updates, and since my sons constantly remind me that now only "old people" like my friends and me use Facebook, this book should hold appeal for our age group.

The characters in the book are interesting and well-developed, and I particularly liked Alice's friend Nedra, a divorce lawyer who is finally marrying her girlfriend of many years. Nedra tries to be the voice of reason for Alice as she falls farther down the hole, like her literary doppleganger in Wonderland.

As a mother of two grown children, I could relate to Alice's connection with her children, and the relationship she had with her son was particularly touching.

As Alice answers the questions, she reflects back on her marriage, where it began and how it ended up where it is. I think that many women reading this may do the same. One thing I found interesting was that we saw Alice's answers, but we didn't see the questions; we had to guess what they were.

I read the book on my Kindle, and at the end of the book, the questions are given, but you had to go back through the book to match them up. This would be easier to do with actual physical book rather than an ebook, so I would recommend reading this in physical book form.

I have to admit that halfway through this book, I thought I saw where it was going and I was not happy about it. But I have to give to credit to Gideon, she took what could have been a cliche and skillfully created a satisfying resolution to the story.

One sign of a good book for me is that I continue to reflect upon it after I finish reading it, and weeks later, I'm still thinking about Wife 22.

Posted by (Diane) bookchickdi at 4:16 PM