Dave Bing- A Life of Challenge by Drew Sharp 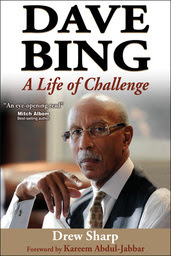 I grew in Central New York, so of course the name Dave Bing is a familiar one to me. He played basketball for the Syracuse Orangemen, well before they were the powerhouse team they are now. He put SU basketball on the map, and then went on to be drafted by the Detroit Pistons, where he helped to build an NBA team.

Drew Sharp has written Dave Bing- A Life of Challenge, the definitive book on Mr. Bing, who went on to found a multimillion dollar company, Bing Steel, and to become mayor of Detroit during its most challenging time.

Bing is a fascinating man. He grew up in Washington DC and credits his father Hasker with giving him the morals and work ethic, the tools he needed to succeed not only in basketball, but more importantly, in life.

Bing wasn't the most talented basketball player, but he made up for that in brains and his capacity for sizing up a situation and figuring out how to make the most of his opportunities and talents. He committed to Syracuse University for college, a school where there weren't many black students, but the fact that Ernie Davis played football there and was the first African-American to win the Heisman Trophy weighed in SU's favor.

While I read this book because of the SU connection, and I found that section of the book very interesting (especially with the quotes from legendary SU basketball coach Jim Boeheim, a former teammate and still a good friend), as well as his spectacular NBA career with the Pistons (where he was named one of the 50 best NBA players of all time), it is his post-basketball career that ends up being the most impressive.

Bing knew that a basketball career wasn't forever, so he strategized as to what he would do when basketball was over. During the off-season, he worked as a bank teller and learned the business, just like he did with basketball.

Detroit was Motor City, and the car business was king. Bing figured that car manufacturers needed steel, so he gathered investors and began his own steel company, Bing Steel. Over the years he grew Bing Steel to be a $350 million company, and he became one of the most visible and successful black business owners in the country. A highlight for him was meeting President Reagan as he was honored for his success as a minority businessman.

The recent recession hit Detroit very hard, and along with a corruption scandal that undid mayor Kwame Kilpatrick, the city was in big trouble. Their finances were decimated, their infrastructure was crumbling, homes were abandoned, and people were fleeing the city. People turned to Dave Bing for help.

Bing was talked into running for mayor, a huge challenge for anyone, let alone someone who had never been involved in politics. Sharp tells an amazing story here, and this is the strongest section of the book. I was riveted by it, and the book became not only Bing's story, but the story of a once-proud All-American city that was coming undone.

Personal health issues, problems with the unions, a possible takeover of the city's finances by the state of Michigan, and a political scandal of his own created the biggest challenge of Bing's life. Could he turn it around and be successful one more time, when it was most critical for his adopted city?

Sharp shows Bing's successes and failures, his strengths and weaknesses, and we see the personal side of him as well as the professional. Dave Bing- A Life of Challenge brilliantly profiles one of the most interesting American men of the past 50 years, a man who lived up to his father's high standards and made the world around him a better place.

Posted by (Diane) bookchickdi at 4:59 PM