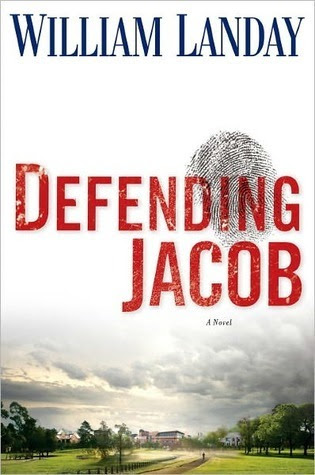 There are a two books that published within two months of each other last year, both about fathers dealing with their sons being accused of murder. The first is Defending Jacob by William Landay. The other is Noah Hawley's The Good Father.

The main character, Andy Barber, is an assistant DA in a town in Massachusetts. When a teen age boy is murdered, he is the prosecuting attorney until his son Jake is accused of the murder. The dead boy bullied Jake, and Jake was tired of it. But Andy believes that a man previously accused of molesting a young boy, and who was seen in the park where the boy was murdered, is the real killer.

Andy is forced to take a leave from his job, and his wife Laurie has a hard time dealing with the accusation, the loss of her friends and the isolation of her family. She finds out that Andy has been keeping a big secret from her, and this causes her to pull farther away from her husband.

There is a lot of suspense in this novel, and Landay excels in the courtroom scenes, especially the scenes with Andy on the stand battling against his former colleague who wishes to takes Andy's position in the DA's office.

This novel is unsettling for parents, and will cause you to ask yourself if you really know what's going on your child's life. With all of the social media and helicopter parenting today you may think you know everything about your child, but this novel may disabuse you of that quaint notion. Laurie has a line early in the book after the murder but before Jake is accused, talking to other mothers she says,

"I think we overestimate what we can do as parents. Your kid is your kid. You get what you get."

The nature versus nurture question definitely comes into play in this novel.

This novel drops a bomb at the end, one that the author only slightly hints at, but I got a sinking feeling about where it was going. Yet I still didn't know exactly how it would end, and it is a shocker, one that almost caused me to fall off the treadmill when I got there.

Landay skillfully takes the reader on a roller coaster ride, and this is one crackerjack of a novel. Defending Jacob is a best seller in hardcover and made many best of lists last year.

My review of The Good Father is here.