I have attended close to one hundred Broadway shows and concerts and I have never actually seen an audience leap to its feet at the end of a show until last night's Manhattan Concert Production's performance of Ragtime at Lincoln Center.

It was a glorious show, with each role cast to perfection. Some of the highlights included the incomparable Norm Lewis (Porgy & Bess) as Coalhouse Walker Jr., who transforms from a soulful musician desperately in love with the beautiful Sarah to a vengeful man seeking justice after a racial incident spirals into tragedy. His deep, rich voice is best expressed on Make Them Hear You and his beautiful duet with Patina Miller (Sister Act), Wheels of a Dream.

Miller had the audience in the palm of her hand as she sang Your Daddy's Son, and she somehow made the audience believe that the binder she held in her arms was her son.

Lea Salonga (Miss Saigon) was a clear audience favorite in the role of Mother, and the audience roared their approval after she sang Back to Before.  The humorous performance of What a Game had a joyful energy as the ensemble guys praised the great American past time of baseball.

The group numbers, Ragtime, which opens the show with a bang, Til We Reach That Day (which closes Act I) and the reprise of Ragtime/Wheels of a Dream that closes the show filled the auditorium with such a joyful noise, it gave me chills.

Other standout performers were Michael Arden as Younger Brother, Manoel Felciano as Tateh, Howard McGillin (the Phantom in Phantom of the Opera) as Father, Kerry Butler as a bubbly Evelyn Nesbit and an incredible young Lewis Grosso as The Little Boy. Remember that name, you will hear from him for a long time to come. It was also great to see the amazing Tyne Daly as Emma Goldman; I just wish she had a larger role.

A chorus filled with high school, college and community choirs from around the country added their voices to the ensemble, along with over a dozen ensemble performers I recognized from Broadway shows.

This was one of the top five shows I have seen since I've been in NYC; it will be difficult to top this experience and I think many of the hundreds of people at Lincoln Center last night agree with me.

Here are some backstage photos from last night's show via Broadway.com 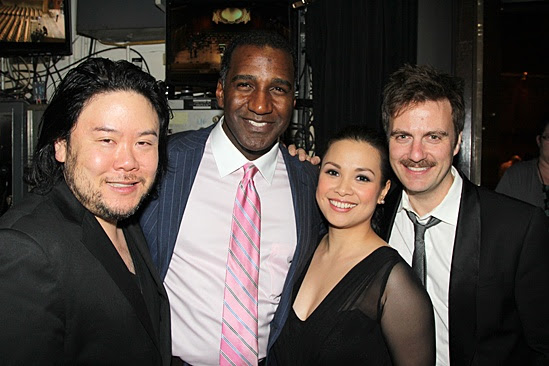 Posted by (Diane) bookchickdi at 4:21 PM