A Far Piece to Canaan by Sam Halpern 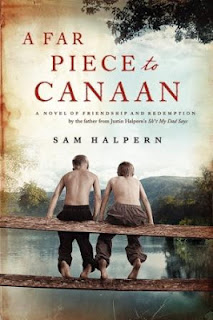 Sam Halpern is best known as Justin Halpern's dad from the Twitter handle S*@tMyDadSays. Justin posted funny things his dad said, it took off, and Justin got two very funny books and short-lived TV series out of it.

Though both books S*@T My Dad Says and I Suck at Girls are gut-busting hilarious, they also have a lot of heart, most of that coming from Justin's dad Sam. Yeah, he was pretty blunt with his son, but he also showed great love and affection, and that was my favorite part of both books.

Sam Halpern has written a novel, A Far Piece to Canaan, mostly set in the hills of Kentucky post -WWII. The cover reads 'a novel of friendship and redemption', and that gives the reader, along with the cover illustration of two tween boys sitting on a fence, a pretty good idea of what this book is all about.

We meet twelve-year-old Sam Zelinsky, who along with his family- Dad, Mom, and three older siblings- are sharecropping on a farm in Kentucky. Sharecropping is an incredibly tough life, and Halpern's writing really opened up my eyes to a world I did not know well. Not only are the sharecroppers dependent on the weather, like most farmers, they are also subject to the owners of the farms and their sometimes changing whims. The Zelinskys hope to make enough money to buy their own farm in Indiana.

Sam's best friend is Fred, whose family is struggling even more so than Sam's family. Fred's father saves every penny he makes to put toward buying mules and equipment, even if it means his family goes without food or decent clothing.

I enjoyed watching Sam and Fred's friendship develop. I live with my husband and two sons, and so that world of maleness fascinates me. Much like Khaled Hosseini's The Kite Runner, it gave me great insight into how boys relate to each other.

The book moves back and forth between now and the years on the farm in Kentucky. Sam's beloved wife Nora told him before she died that he needed to go back to Kentucky to look for his friend Fred whom he hasn't seen in 60 years, even though Fred had tried to get in touch a few times over the years.

There is some action in the book as someone is savagely butchering livestock. Sam, Fred and two of their friends stumble upon where this crazed man is hiding, but they don't tell anyone because they fear that two of the boys' fathers will beat them for going somewhere they have been forbidden to go.

The boys decide to protect each other rather than tell the truth about what they know. Anyone who has dealt with young people has probably run across this. The young mind isn't mature enough to make a reasoned decision. It is more important to be loyal to a friend.

When the crazy man burns down a home and tries to kill Sam, they boys are forced to tell what they know. The scenes with the sheriff and the boys and their fathers as they first try to get the boys to tell the truth and then go after the man are crackling with tension.

The last few chapters tell Sam's story as he goes back to Kentucky to track down his friend Fred. His journey is moving as he tries to redeem himself. He moved away and left everything and everyone behind, and now he has regrets about not staying in touch.

Reading this did make me think about the journey we are on as we travel through life. We make friends at different stages, and this book will encourage you to be grateful for everyone you have loved, and to remember that they played a part in making you who you are.

My favorite line in the book is this one from the adult Sam:

"Being human is difficult", I said aloud. "Common decency is the greatest quality to which one can aspire and the hardest to practice."

Reading Justin's books, I always knew that his dad Sam had a big heart and I am glad to see that he gets to express his voice in this beautiful novel, which I suspect has much in common with Sam's own young years (and not just that he and his protagonist share a name).

The only criticism I have is that some of the descriptions of the Kentucky landscape went on a bit too long for me.

Thanks to TLC Book Tours for including me on this tour. More reviews of the book can be found below.