This is the first year that I missed the Book Expo's Editor's Buzz Panel, where six editors each present a book that people will be talking about in the fall. Luckily, the next day, Ron Hogan moderated a panel where the six authors of the books each had a few minutes to talk about their books to an eager audience. 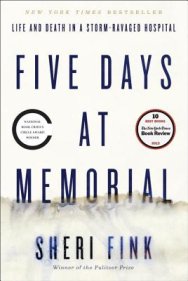 I got to attend that, and I enjoyed hearing these passionate writers speak about their books. The first one up was a book I really wanted to get (and I'm totally absorbed in it right now)- Sheri Fink's Five Days at Memorial: Life and Death in a Storm-Ravaged Hospital. Fink is a physician who has worked in emergency situations in natural disasters (like Haiti) and her book sounds totally fascinating.

She writes about Memorial Hospital in New Orleans during Hurricane Katrina. Patients and staff were trapped there and doctors were later arrested for euthanizing patients who were very ill. She interviews people who were there to get their stories, but it is also an indictment of how hospitals and medicine have become big business. It was my one  must-have book of the show. (I didn't get it there, but did get it through Edelweiss.) Five Days at Memorial publishes in September from Random House.

On a similar note, Katy Butler wrote a book Knocking On Heaven's Door- The Path to a Better Way of Death. Her premise (and I agree with it) is that our society does not know how to die. We spend so much money prolonging lives, thinking of the quantity of years, not the quality of life.

She spoke passionately of her father, who had a pacemaker put in at the age of 79, and how his years after that were spent dealing with chronic illnesses; he led a very unhappy, unhealthy few years. When her mother became older and frail, after seeing what her husband went through, she chose a different ending. No extraordinary measures were taken, and her last years were a life filled with joy. Knocking on Heaven's Door publishes in September from Scribner. Butler's website is here.


Wendy Lower's Hitler's Furies: German Women on the Nazi Killing Fields is about a subject not extensively studied- there were German women who worked with the Nazi's as secretaries helping to decide which people lived or died in the Eastern front. Some of these women even personally shot women and children themselves. The book is from Houghton Mifflin Harcourt and publishes in October.

Still another non-fiction book is Jennifer Senior's All Joy and No Fun: The Paradox of Modern Parenthood. Senior says that there are many books out there that discuss how parents affect their children, but none on how having children affect parents. It's an interesting premise, and she interviewed many people on the topic. It publishes in January 2014 from Harper Collins.

There were only two fiction books on the list this year, the first one is The Facades by Eric Lundgren. Set in a fictional city that the author says is a "cross between Kafka and Gotham City", a man searches for his famous opera singer wife, who has gone missing. The city itself is an important character in this provocative novel. Overlook Press publishes this novel in September.

Lastly, Amy Grace's novel The Affair of Others tells the story of a young widow who buys a small apartment building. She carefully chooses her tenants, expecting to be left to her grief. But when a female tenant moves in and turns things upside down, bringing sex and violence into their quiet lives, everything changes. This one looks like it would appeal to fans of The Other Typist, a book I just loved. Picador publishes this in August.

Ron Hogan did a great job keeping things moving along so that we could hear from all of the authors in the allotted time slot. I can't wait to read these buzzy books.

Posted by (Diane) bookchickdi at 1:01 PM

Labels: All Joy and No Fun, BEA13, Editors Buzz Panel, Five Days at Memorial, Hitler's Furies, KNocking on Heaven's Door, The Affairs of Others, The Facades