City of Hope by Kate Kerrigan 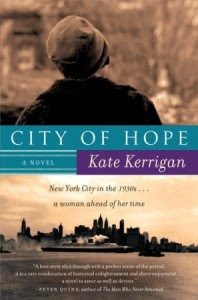 A few years ago I had the pleasure of meeting Kate Kerrigan, the charming Irish author of Ellis Island, a novel about a young Irish woman who came to America to earn money to pay for an operation her husband back in Ireland desperately needed after an injury.

Set in the 1920s, Ellie comes to New York to work first as a maid, and then learns how to be a secretary. She falls in love with a wealthy businessman and when it comes time to go home to Ireland, she is torn.

City of Hope opens in the 1930s back in Ireland, on the farm where Ellie lives with her husband John. John loves his life as a farmer, but Ellie wants more. She opened a shop near the farm to sell grocery items and products grown on the farm. She started a secretarial school and a beauty salon. Ellie was quite the businesswoman and always looking for ways to expand, much to John's consternation.

When John dies unexpectedly, Ellie is devastated. She runs away, back to New York, to try and pick up the pieces of her life. A chance meeting with a mother and her children, homeless and living in Central Park, convinced her to try and do something to help them.

She buys a home that has been foreclosed on and moves this family in, along with Bridie, an older woman who worked with her as a maid many years ago. They work to rebuild the house, and find that there are many men with construction skills looking for work in the Great Depression.

Ellie finds a new mission for her life- refurbishing homes and giving people a chance to rebuild their lives. She hopes that all of this will keep her from missing John. She meets many new people, and puts her talents to good use. She starts a cooperative, where the women open a cafe and store, selling their prepared food to the wealthy women in the neighborhood.

Then people comes back into her life unexpectedly: her old friend Sheila and a man from her past. Ellie must face up to her past and decide what path she is going to take.

I have to admit that at times I did not understand Ellie's actions. She seems to run away from her problems rather than face them. After John's death, she runs to New York and hides out, leaving John's mother all alone. At the end of the novel she makes a decision that I find baffling. Although I would make different decisions, Kerrigan skillfully creates such an intriguing character that I found myself rooting for her even as I found her maddening.

I love books that take me into a completely new world, and City of Hope does just that. I did not realize that there were Hooverville tent cities in Central Park during the Depression. Kerrigan clearly did a great deal of research to bring this interesting period of time in New York City to such vivid life.

The characters are so well drawn, and I found that if I closed my eyes, I could picture the street in Upper Manhattan where Ellie created new lives for so many people. The problems that Ellie's friends faced during the Great Depression resonated with the problems that face many people today- the loss of jobs and their homes, forcing their families out into the streets. I liked the parallel there.

My favorite line in the book is one from Ellie during John's funeral.

"I shut down. I did not have the room to absorb all their grief, when I could not accommodate my own."

That just hit such a visceral note for me.

Kate Kerrigan's website is here.
My review of Ellis Island is here.

Other stops on Kate Kerrigan's TLC Tour are:


Thanks to TLC Book Tours for including me and William Morrow for providing a copy of the book.