New in Paperback- The Chaperone by Laura Moriarty 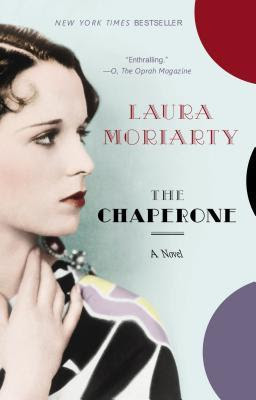 
What does it say about a book where silent film star/siren Louise Brooks, a real character who became famous (and infamous) for her outrageous behavior that she is not the most interesting character in Laura Moriarty's novel The Chaperone? That title belongs to Cora Kaufmann Carlisle, the title character of this beautiful novel.

Cora lived in an orphanage in New York City near the turn of the 20th century, unsure of her parentage. She was sent on the 'orphan train' westward to be chosen by a family where she would live. The orphans boarded the train, and at each designated stop, they would get out, sing a song, smile, and hope that they would be chosen by a family.

I had never heard of this 'orphan train' before, and the custom struck me as a perversion of the slave auctions held in the 19th century. Some of the orphans ended up with families who just wanted extra free labor, but Cora was lucky; the Kaufmanns chose Cora and grew to love her as if she was their own daughter.

So Cora ended up in Kansas, where she met Alan Carlisle, a lawyer. Alan courted her and they married. Cora had a difficult labor and gave birth to twin sons. Alan was a successful lawyer, and the Carlisles had a good life. Cora kept busy with volunteer work and her friends, yet she felt somewhat restless.

Cora heard that the Brooks family were looking for a chaperone to accompany their 15-year-old daughter Louise to New York City while she attended dance classes. Since her sons are off to college soon, Cora decides to take the job, hoping that she can find the woman who left her in the orphanage years ago.

Cora was taken aback by Louise's mother's complete disinterest in her own children. It seemed like she did not want to care for her children in any matter. Cora was hired for the job, which turned out to be much more than she bargained for.

Louise Brooks is larger than life, even at 15 years of age. She can't wait to be let loose in New York, and chafes at Cora's rules; it is a classic generation gap. The world is changing, and Louise is at the forefront of the change. She wears low-cut dresses, too much makeup and flirts shamelessly with any man who can get her something she wants.

Cora is frustrated by Louise's behavior, and more than a little frightened for her. She fears that someone will take advantage of Louise, and she is relieved when she finds that the dance teacher keeps a close tab on her students.

Living in New York, I found the part of the book set there utterly fascinating. Moriarty drops the reader into a hot summer in the city in the roaring 1920s, and you can smell, taste, see, feel and hear all of the city; it is a complete sensory experience.

The summer in New York changes both Louise and Cora's lives. Louise is chosen to stay on with the dance company and she eventually becomes a famous silent star. Cora returns home, but she is profoundly changed by the experience as well.

Secrets and the damage they do are a major theme in the book. Cora longs to find out who her mother is, her husband keeps a big secret from her (which I did not see coming!), and Cora keeps a secret from her children. Louise confides in Cora, and Cora has to decide what to do with the information.

Family is a theme too; what makes a family? Is it blood or can you create a family with people whom you love? Cora has to deal with that question for her entire life, and she seems to finally come to peace with it at the end of her life.

The title of the book, The Chaperone, is the perfect title, because we get the complete arc of Cora's life from beginning to end. As her story unfolds, we get to know a unique woman, a woman who finds her voice and her strength, who dares to make a life for herself.

I fell in love with this book, and you will too. The writing is mesmerizing, the characters intriguing, the setting fascinating. The sign of a good book for me is that I want to know more. Laura Moriarty has piqued my curiosity about orphan trains and Louise Brooks, and I was so pleased that she included some of her research sources in the acknowledgments.

Laura Moriarty's webpage is here.
Christina Baker Kline has written a novel titled Orphan Train, which is on my TBR list. You can read more about it here.
I attended an event with Kline and author Caroline Leavitt (Is This Tomorrow) at the Center for Fiction, and my post about that is here.