My Planet by Mary Roach 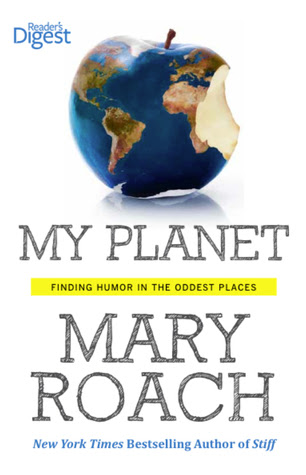 I know Mary Roach as a bestselling author of books, like Stiff and Bonk, (wait, they sound slightly pornographic) that incorporate science with humor. But I never knew that she wrote humor columns for Reader's Digest, mostly about her life with her husband Ed.

These columns have been compiled in My Planet: Finding Humor in the Oddest Places, and it had me laughing so loud as I read it, my family stared at me as if I were crazy. I was crazy, crazy with laughter and recognition at Roach's observational humor.

From page one, I was a goner. She describes her first date with her husband Ed, who got up from the table to wash his hands almost immediately upon being seated at the restaurant "like a little raccoon, leaning over the stream to to tidy himself before eating."

She goes on to discuss their "hygiene gap". Ed immediately replaces the toilet seat when he moves to  a new place because "he didn't know who'd been sitting on it." (I'm with Ed on that one.) Mary flossed her teeth in bed and drank straight from the OJ container. (Again, I side with Ed.)

Mary used the "Designated Countertop Sponge to wash the dishes and the Designated Dishwashing Sponge to clean the bathtub" an act she describes as "tantamount to a bioterror attack", according to Ed. Ed had what Mary called "crud vision" and she didn't.

She said that "like any normal couple, we refused to accept each other's differences and did whatever we could to annoy one another." It just got funnier from there.

Mary makes lists: "daily, To Do lists, long-term To Do lists, shopping lists and packing lists." Ed reluctantly makes lists on the corner of newspapers that are illegible. Making lists keeps her anxiety levels down, while Ed controls his anxiety by forgetting to make lists.

Her best list is composed of party guests that dates from 1997. On occasion she updates it, deleting people who have moved away, adding new friends. They are never having this party, but just updating the list is a party for Roach. (I think I know some people like this.)

Her essay on relatives visiting struck a chord of recognition. After day six, she says that

You begin to view your guests through the magnifying glasses of the put-upon host. A TV set turned four decibels higher that you like it registers as "blaring." Making a 13-cent long-distance call is perceived as "running up my phone bill!"

She concludes this essay by saying

Family are people who live together- if only for a week at a time. They're people who  drop towels on your bathroom floor, put your cups and glasses in the wrong place and complain about your weather. You do it to them, they do it to you, and none of you would have it any other way.

One of the essays I most related to was about conjugal hearing loss that affects married couples. She says that married couples attempt to communicate with the other person is in a separate room or on separate floors, "preferably while one is running water or operating a vacuum cleaner or watching the Cedar Waxwings in the playoffs." (This is one of my pet peeves.)

Other humorous topics include entering the Age of Skirted Swimwear, dropping off her car at the mechanic because it won't start only to have him call her and tell her he's charging her $50 because "she is stupid" (the car was out of gas, but she praised him for not ripping her off by claiming it was something more serious), and arguing about buying a sofa.

Roach's essays reminded me of Erma Bombeck. She deals with life's issues in a relatable, funny and  good spirited manner. This is a wonderful book to stick in the car and read while you are waiting for the kids at baseball practice or in a doctor's waiting room. It's good for laugh and you'll want to read aloud from it so that others can enjoy her humor too.