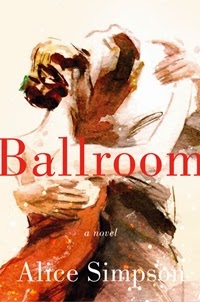 Ballroom is Alice Simpson's debut novel, and just as its title suggests, it is set in the world of ballroom dancing in 1999 New York City. The Ballroom is a dance hall that is a little bit shabby, and past its prime. We meet some of the people who dance there every Sunday night in Simpson's book and get a bit of their own stories, told in their own voices.

Harry is a 60-year-old retired shoe factory worker who teaches ballroom dancing on the side. He lives a spartan existence in a tiny apartment. Every Friday for years, 20-year-old Maria, his downstairs neighbor, comes for dance lessons at this apartment, lessons her father knows nothing about. Harry is planning on taking Maria to Buenos Aires to live on her 21st birthday.

Maria's dance partner is Angel, a hardworking young man whose dream is to own a dance hall/studio, with Maria as his business and life partner. He is the kindest man in this novel.

Joseph, 60-years-old, works for the telephone company and is umarried. He lives to dance with Sarah, a 38-year-old twice divorced woman who loves 1940's movies and doesn't understand why the men she knows don't act more like the men in those movies.

Sarah would give anything if the handsome Gabriel would choose her as a dance partner. Gabriel is wealthy, drives an expensive car and can have anyone he wants as his dance partner. He uses women like Kleenex and is married to a very unhappy woman.

Ballroom introduces us to this world, one with special shoes and flashy clothes, private lessons and, at least in this story, lonely people looking for a human connection and love.

I wanted to like this novel more than I did. I think it might have worked better for me if it concentrated on just a few people's stories, like Maria and Angel's for example.  The chapters that are longer, where we get a more in-depth look at Gabe and his strange relationship with his smothering, selfish mother or Maria's life with her hardworking father, succeed much more than the two or three page chapters.

The men in the novel (except Angel) are very cruel to women. They berate them while dancing with them or use them for sex and then dump them. They are horribly misogynistic. And Harry's plan to whisk away young Maria on her 21st birthday is just plain creepy.

I did learn a few interesting tidbits, such as you never walk away from a partner during a dance (even if they say rude things to you) and that women pay instructors to dance with them for an evening at dance halls. Who would have thought.

Thanks to TLC Tours for putting me on this tour. The rest of Alice Simpson's stops are here: