How To Bake A Man by Jessica Barksdale Inclan 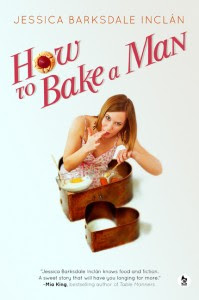 Becca Munchmore is 27 years old and the oldest student in her graduate level marketing class. She's worried about fitting in, and wearing her mother's old discarded denim skirt that she found in the Goodwill bag doesn't help.

She comes to the realization that school is not the answer. Her boyfriend left her to work in Africa to help the poor, she quit the job she had, and now she has a idea. She loves to bake; why not sell her baked goods to offices? Though her mother hates the idea, she loans Becca the money to buy supplies.

Now she just needs an office to start. Her best friend Dez lives across the country, but Dez' husband has a contact in a San Francisco law office and gets Becca an interview. Becca's delicious baked treats win over the friend, and she has her first client.

Sal, her downstairs neighbor, drives a taxi and works as a bouncer, but he wants to help Becca with her business. Since Sal has a car and she doesn't, she takes him up on his offer and along with Mom's occasional baking and freezer storage, Becca can make this work.

People in the law office love Becca's Best's muffins, cinnamon rolls and breads. She and Sal make twice daily rounds, and they even make friends with a few of the office staff. Except for Jennifer.

Jennifer is a lawyer with a bad reputation; people actually run and cower when she shows up. Jennifer also looks just like Becca, so much so that Jennifer's boyfriend Jeff, also a lawyer, begins to show an interest in Becca.

Becca thinks Jeff is way too nice to be in love with the horrible Jennifer, and when he kisses Becca, she falls for Jeff. Then she discovers that Jennifer is cheating on Jeff with a married lawyer. Should she tell Jeff?

This story could be a typical chick-lit novel, where the kind-hearted heroine gets the rich, handsome guy after he realizes the woman he is dating is no good, and that would have been okay. The story is interesting enough, and I liked the food angle. (The descriptions of Becca's baked goods made me drool.)

But the story takes a turn I wasn't completely expecting, and that elevates this novel to a good story. As I was reading How To Bake A Man, all I could think of was that this would make such a cute romantic comedy movie. The characters are interesting, the story has some twists-and-turns, and I could see Emma Stone or Rachel McAdams playing Becca in the movie.

How To Bake A Man is the perfect book to pick up on a Friday night after a hard week's work, it's a fun, light read. And it will inspire you to run out to the grocery store to stock up on baking supplies as Inclan includes her delightful recipes for the reader to recreate and enjoy.

Thanks to TLC Tours for putting me on Jessica Barksdale Inclan's tour. The rest of the stops are here: