The Way Life Should Be by Christina Baker Kline 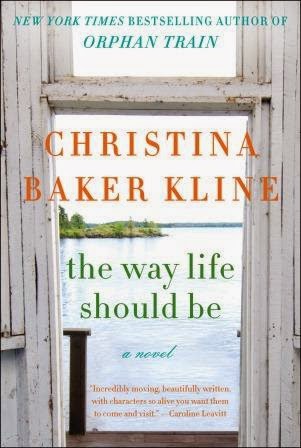 The first Christina Baker Kline novel I read, like most people, was Orphan Train. I found the story so engrossing, and I was surprised that I had never heard of the orphan trains before.

After that, I read Sweet Water by Ms. Kline and was happy to report that I enjoyed that one as well. I just finished another book from Kline's backlist, The Way Life Should Be, and I found this book the best of the three.

Angela is a 33 year-old single woman living in Manhattan, with a burgeoning career as an event planner for an art museum. She has a big event coming up that could bring her into the big time if it all comes together.

She has a loving father, a grumpy stepmother, and an Italian grandmother who loves Angela dearly. Nonna taught Angela all about Italian cooking, and Angela always enjoyed spending time in the kitchen with her.

The only thing missing in her life is true love. When her friend Lindsay meets a wonderful guy through online dating, Angela decides to give it a try. She finds a man who runs a sailing school in Maine, and they begin an online romance.

Angela has a picture in her mind of a quaint Maine cottage by the sea, her and her man living together in blissful love. When things go badly at work, she decides to pick up and move herself to Maine to give love a try with her online beau.

There are bumps along the way, but Angela sticks to her guns and is determined to stay in Maine. She starts hanging out a local coffeehouse, and the owner Flynn, an Aussie transplant who followed his heart (and a man too, like Angela), becomes her best friend and offers her a job.

She finds a tiny, dilapidated cottage (nothing like her dream) and convinces Flynn to redecorate the coffeehouse and offer homemade pastries and soups for lunch. Flynn persuades Angela to offer cooking classes, and she makes some new friends.

This book has so much that ticked all my boxes- Angela is a strong woman, Flynn is adorable, there are  lots of delicious descriptions of food (recipes included), a group of interesting new friends (with secrets) and a setting that is new to me (I must visit Acadia National Park).

As someone who has planned events, I found that part of the story fascinating. And any book that has food at its core, if it is well done like this is, will always appeal to me. I also liked that the characters are not one-dimensional (except the wicked stepmother). Angela's boyfriend Richard could have been the stock guy-who-is-really-a-jerk, but Kline gives him shades of color that made him more interesting.

The relationships- Angela and Nonna, Angela and Flynn, Angela and Lindsay- are so believable, you wish you were Angela. I will warn you that The Way Life Should Be will inspire you to dig out all of your food utensils and give Angela's recipes, like Pasta e Fagioli, Chicken Marsala and Basil Marinara, a try.

When Tom asks Angela who she really is, she thinks "the stories we tell about ourselves are filled with half-truths, distorted recollections, and blind spots as well as occasional moments of insight. It's all in the spin, isn't it?" And, I for one, liked the spin of Angela's story.