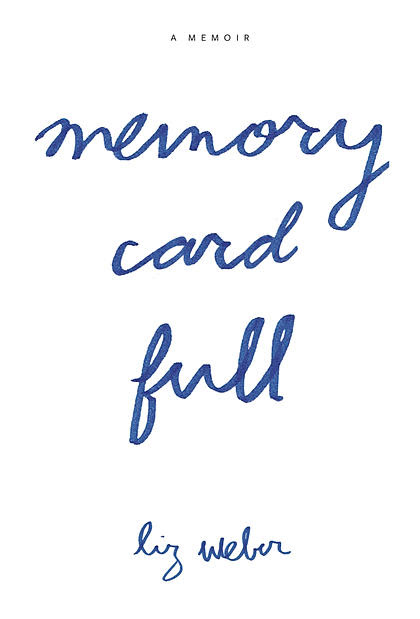 Memoirs are only as interesting as the people who are writing them. At first glance, a memoir about a 37-year-old woman who works part-time as a bartender but wants to be a writer may sound like, oh, no, not another story about someone who can't find her way, but in Weber's hands, Memory Card Full is an honest, fascinating read.

Liz is the youngest child in her family. Her older brother and sister have successful careers, and her parents are very supportive and loving, but at the age of 37, Liz is frustrated that she doesn't have a career or even a full-time job.

Her dog Rufus is the one mainstay in Liz's life. Coming home to him every night after work keeps her grounded, and as any dog owner knows, a dog's love is unconditional. Liz is never completely alone as long as Rufus is waiting for her at home.

The book begins with Liz in Mexico in 2009 on vacation, and we know that Rufus has died. She wants to take a photo, and her camera tells her that the memory card is full, and she has to decide whether to erase some of the pictures of Rufus on her camera.

Then we flashback to 2007. Liz breaks up with her boyfriend, and she realizes that she has a bad habit of staying in relationships long after she should have ended them. She works as a bartender at a South Street Seaport restaurant, and her boss is a truly crazy, evil woman whose behavior is appalling.

Crazy boss fires Liz, and Liz has to scramble to find another bartending job. Liz also models lingerie, working four weeks a year modeling for manufacturers trying to sell to distributors. Between that and bartending, she manages to cobble together enough money to pay rent, buy groceries, but not much more.

She wants to be a writer, but isn't making enough progress there. She has to take a job working days in a law office, which she hates, and between that job and bartending, she has no time or energy to write. She is stuck and her life is in a rut. How can she move forward?

Liz's description of working as a bartender is fascinating. Her descriptions of coworkers and customers made me feel like I was right there at the bar, drinking a white chocolate martini. Likewise, her claustrophobic job at the law office had me anguished watching the clock along with her.

Rufus is 12 years-old and has a difficult time walking due to his arthritis. Her parents help Liz by taking them to the vet, and paying for it, but it is obvious that Rufus is probably only going to get worse. Liz must face facts that a decision must be made soon.

The section on Rufus's dying really moved me. We had to put our beloved dog to sleep a few years back, and I was taken right back there as Liz movingly describes watching Rufus fail, and knowing what she must do.

Her grief is palpable, and anyone who has lost a dog will cry along with Liz. She is brutally honest about how painful her grief is, and how it takes her a long time to get through it. I totally related to her.

While I didn't totally understand all of Liz's life choices, she writes so honestly and openly about her life that I always found her interesting, and you can't ask for more than that in a good memoir.

rating 4 of 5
Thanks to TLC Tours for putting me on Liz Weber's tour. The rest of the tour is here: