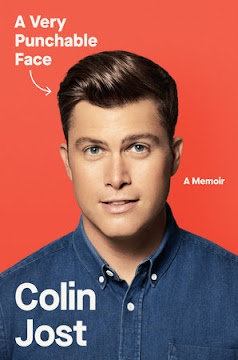 If you know Colin Jost as the Weekend Update co-anchor for Saturday Night Live, you won't be surprised to discover that his memoir, A Very Punchable Face, is very funny. If you know that he was the head writer for SNL, you may not be surprised to know that his book is also very well written.
I have to say I was mildly surprised to discover that A Very Punchable Face is one of the laugh-out-loud funniest books I have ever read, and I read a lot of books by funny people. The only book I laughed harder at was Justin Halpern's S*it My Dad Says.
Jost grew up on Staten Island, on a block where his extended family owned all of the houses. He didn't speak until the age of four, and when he did he said he talked like he was Carmela Soprano. He was a chubby kid, not very athletic until he took up swimming. As a lifeguard at the local beach club, he lists his seven most important duties, five of which involved monitoring the beer kegs for the members.
After getting accepted to the prestigious Regis High School in Manhattan, he took a ferry, bus and subway one and a half hours each way to get to and from school. He ends up at Harvard, where he works hard to get onto the staff of National Lampoon.
There are chapters about the seven times he got stitches, spending a semester abroad in Russia where he didn't speak Russian and his hosts didn't speak English, and his job working on a local newspaper after college.
And then he lands a job as a writer on SNL. Jost gives us some great backstage information, from his meeting with Lorne Michaels where he was unsure if he was hired (he was), a chapter on some of the memorable sketches he had a part in writing, his successful partnership with Michael Che, his co-anchor on Weekend Update, and their disasterous co-hosting of the Emmy Awards.
Some of the funniest parts of the book are his footnotes at the bottom of the pages, which contain some of his best one-liners of the book. His chapter "Why I Love My Mom" about his mom responding to 9/11 and nearly dying twice, is harrowing and a beautiful tribute that any mom would love to receive from her son.
This world can be so troubling at times, it's great to be able to pick up a book and have a laugh. I give Colin Jost's A Very Punchable Face my highest recommendation.