The Last Story of Mina Lee by Nancy Jooyoun Kim 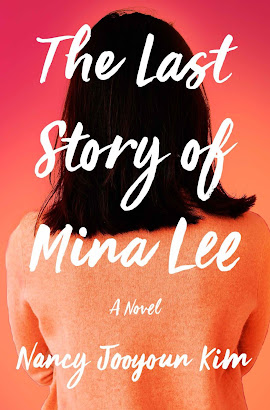 One of the reasons we read fiction is to put ourselves in the shoes of other people, people who have different life experiences than ourselves. Nancy Jooyoun Kim does that beautifully in her novel, The Last Story of Mina Lee.
Margot is a 26 year-old Korean daughter of Mina Lee, who raised Margot on her own in Koreatown in Los Angeles. Margot lives in Seattle and hasn't seen her mother in awhile. She is driving to LA to bring a friend to his new home, and after being unable to get a hold of her mom by phone, she stops by her mom's apartment and finds her dead on the floor.
It appears that Mina fell and hit her head, but after the landlord tells Margot that he heard Mina arguing with a man, Margot becomes suspicious that perhaps her mother was killed.
Margot begins to dig into her mother's life, discovering things that she didn't know about Mina. They had a difficult relationship. Mina owned a clothing shop that burned down during the LA riots in 1992. She worked her way back to opening a small shop at a swap meet in Koreatown, but her business never recovered.
Growing up was difficult for Margot. She wanted to be like other kids, act American. She had to work at her mother's store after school and on school breaks, and her mother never learned English. Margot resisted learning Korean, so communication between the two was never good on several levels.
The story is told in two different timelines, so we see Margot working to learn what happened to her mother in 2014, while we see Mina's story in 1987, when she came to America. Mina became separated from her parents as a young child when they were fleeing the war in Korea, and ended up in an orphanage. She never knew what became of her parents.
She came to America as an undocumented immigrant, and found work at a Korean grocery store. She made one friend at the boardinghouse she lived in, and led a fairly lonely life. There was a deep sadness about Mina, something in her life in Korea that she wanted to put behind her.
I found Mina's story compelling. She came all alone to a country where she didn't speak the language. Imagine doing that; leaving your home to go to a place where you know no one, and starting over. We see how hard Mina worked to make a life for herself and later for her daughter, the sacrifices she made. Mina just broke my heart.
Foodies will find many references to Korean dishes here, and book clubs could create an entire evening's feast with them. The Last Story of Mina Lee would made an excellent book club choice, as the mother/daughter and immigrant themes would make for a rich discussion.
If you liked Jean Kwok's Searching for Sylvie Lee, this book would be a good read for you. Both feature a mystery about a person, and a family member who must discover what happened to their loved one, while dealing with the issue of living in a different culture. I highly recommend The Last Story of Mina Lee, I will not forget her.
Thanks to Harper Collins for putting me on Nancy Jooyoun Kim's book tour.

Posted by (Diane) bookchickdi at 6:30 AM