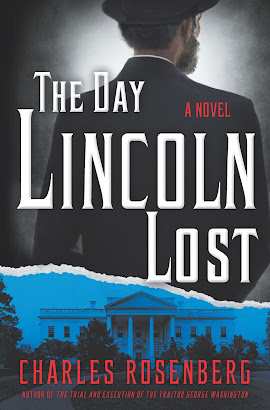 If you are someone who thinks that this time in our political history is unprecedented, Charles Rosenberg's alternate history political thriller, The Day Lincoln Lost, may disabuse you of that notion.
Abraham Lincoln is laying low, waiting out his time as the Republican nominee for President in 1860 at his home in Springfield. Abby Kelley Foster, a famous abolitionist speaker, was asked to give a talk at a local church about the need to end slavery now. She was not a fan of Lincoln's gradual approach to end slavery, and let everyone know that, even in his hometown of Springfield.
Lucy, a twelve year-old girl who had escaped slavery, was captured and jailed in Springfield, awaiting her return to Goshorn, the man who "owned" her. Foster encouraged the crowd to "do something about this", and the crowd surrounded the carriage she was being taken away in. Lucy and Goshorn disappeared into the night.
Foster was arrested for inciting the riot and placed in the Springfield jail. Abraham Lincoln and his law partner Billy Herndon reluctantly agree to represent Foster at her trial, after much discussion about how this will politically affect Lincoln's run for president.
They strategize that the best outcome would be to find Lucy and Goshorn, so they turn to the Pinkerton Detective Agency. Pinkerton puts one of his best agents on the job- a woman by the name of Annabelle, who just so happens to have grown up on a plantation neighboring the missing slave owner.
I liked that the novel had two women who were in roles not usually occupied by females- lecture speakers and detective. The inclusion of actual people in the story, both famous- Lincoln, Allan Pinkerton, and Frederick Douglass- and less well known made for a more interesting story.
President James Buchanan, widely considered one of our worst presidents, is seen here as someone who cares little of the serious problems facing his country, and more concerned with the machinations to  defeat Lincoln. That section may have some resonance for readers today.
One paragraph that particularly struck me is this:

"There is such bitterness in our politics now that people want to avoid arguments with their neighbors, their families, and the people they work with. Or, if they are merchants, with the people they sell goods to."

I guess the rancor we see today didn't start with Twitter; it has been with us a long time.
In this novel, the election of 1860 was not decided immediately by popular vote. No candidate received enough electoral votes to claim victory, which sends the vote to the House of Representatives. (Political junkies will truly enjoy this section of the novel.) I only hope our upcoming election is easier.
The Day Lincoln Lost will appeal to people who like historical fiction as well as political thrillers. The writing is crisp and the characters well drawn. And it reminds us that this union has survived difficult times in the past, and will do so in the future.
Thanks to Harlequin/Hanover Square Press for putting me on Charles Rosenberg's tour.