All hail the King, Geoffrey Rush! 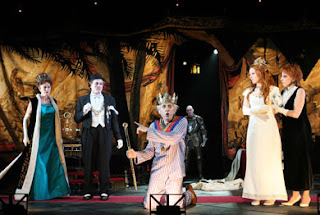 Australian actor Geoffrey Rush brings his considerable physical talents to the revival of Eugene Ionescos' Exit the King, finishing up a limited run on Broadway.

The show has some parallels to recent events. King Berenger's kingdom is crumbling. Too many ill-conceived wars, people fleeing the country, and it appears that the country is actually falling into the ocean.

To top it all off, King Berenger is dying. His first wife, Queen Marguerite, played by the gorgeous Susan Sarandon in her Broadway debut, takes control organizing the last moments of the King.

His much younger, prettier, second wife, Queen Marie, is played by the radiant Lauren Ambrose. She makes the audience believe that she really loves the King for the man he is, not just for what he can give her. This is the second time I have seen Ambrose on the stage, the first time was in her role as Ophelia in Hamlet in Shakespeare in the Park last summer. She is one of our best young actresses, and I look forward to seeing her work for a long time to come.

Andrea Martin, nominated for a Tony for her role, plays the role of Juliette, the nurse/housemaid/cook. She is incredibly funny, as she always is, and her big scene with Rush as she explains her difficult life, is wonderful.

Brian Hutchison hilariously plays the role of the Guard as a surfer dude, as if he were Spicolli from Fast Times at Ridgemont High. Just watching his facial reactions in the background is priceless. William Sandler ably rounds out the cast as The Doctor, who sides with Marguerite in her attempts to control the King.

Geoffrey King is nominated for a Tony Award for his portrayal of the King, and he should win based on the one scene where he does a sort of combination march/dance. He states in an interview with Playbill that he had trained in mime and pantomine, and his training is put to good use in this brilliant scene.

Exit the King is closing on June 14th, so you need to hurry if you want to see it. It has many huge laughs, but the last scene with Sarandon's monologue, coaxing the King towards death, is thought-provoking.
Posted by (Diane) bookchickdi at 6:42 PM