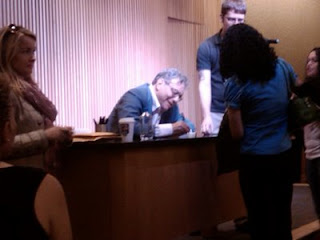 Lewis Black, whom many people know from his 'Back in Black' segment on Jon Stewart's The Daily Show, was at the new Barnes & Noble store on East 86th St. & Lexington in NYC last night promoting his book Me of Little Faith.

He drew a large crowd for the inaugural event at the new store, and he started in immediately poking fun at the sparse decor on the walls, and the wallpaper pattern, which he said looks like what you see just before you pass out. (It actually does!) Then he turned serious, describing his writing process.

Black writes in longhand on paper, believing that the process of physically writing with a pen differs from typing on a computer. He says that one thinks differently writing by hand. Then he proceeded to rant about the kids today "who type with their thumbs on Blackberrys." (I left a few descriptive words out.)

Black answered many questions from the audience, and he gave thoughtful answers. He is a graduate of Yale Drama School, which he likened to mental torture. He said that the professors tore students down to build them back up, like soldiers. He told a cautionary tale of asking a professor for a letter of recommendation. He ran into the professor a few years after he graduated from Yale, and the professor expressed surprise at the fact that Yale accepted Black into the drama school because in his recommendation he stated that Yale should not accept Black into the program. Black cautions students to ALWAYS read the letters BEFORE you send them with your application. Funny and true.

When it came time to get autographs, I told Mr. Black that I have two college ages sons who are, to my disappointment, die-hard Republicans. (If you don't know, Black is not a Republican- he spent the last eight years railing against them in his comedy act. Rent his Washington DC HBO Comedy Special if you haven't seen it- the funniest standup performance I've ever seen.) I asked him for advice, and he said not to worry, they'd grow out of it. Then I told him that they idolized Dick Cheney, and he said something very funny, but not for print here. When I introduced him to my husband and said that he was to blame for my sons's political leanings, Black burst out laughing and shook my husband's hand.

Black is very funny, intelligent man. He says that he is hopeful that he will return to Broadway sometime next year. I'll be in line for those tickets!
Posted by (Diane) bookchickdi at 1:56 PM