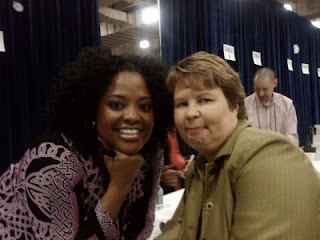 BEA was an interesting experience for me, as it was my first one. I was checking out who were the big draws, and I came to a few conclusions.

Celebrities, not necessarily authors, were popular. One of the first signings I attended was early Friday morning, and it was for The View co-host Sherri Shepherd, whose book Permission Slips publishes in October. She had a long line, but she took time to chat with everyone and take photos. (see above)

Late Late Show host Craig Ferguson had a very long line that kept snaking around for the signing of his book, American on Purpose. There was one man trying to trade three tickets to the Kathie Lee Gifford signing for one Craig Ferguson ticket, but he didn't appear to have any luck. Ferguson was the moderator at a BEA breakfast, so I had the chance to hear him speak. I can tell you he is as funny at 8am as he is at 12:30am, and he really woke up the crowd.

Julie Andrews was very popular, with a long line that they had to move when they ran out of time. I saw Miss Andrews everywhere, at the Borders booth being interviewed, at C-SPAN booth being interviewed. She is so lovely, and she and her beautiful daughter have written many children's books, so she really is an author and celebrity.

Big selling authors were big draws The line for James Patterson, probably the biggest selling author out there now, was huge. He signed in two different places, and both had huge lines. Candice Bushnell, the Sex and the City author had a long line for a book signing for a book that came out months ago.

Literary authors were popular too It was good to see that more literary authors, like Michael Connelly, George Pelecanos, Joyce Carol Oates, and Jonathan Lethem also had many, many people who wanted their autographs.

The panel discussions had many fans The one on Book Reviews in 2010, sponsored by the National Book Critics Circle, was standing room only. The panel had book reviewers for print publications, as well as a representative from GoodReads.com, discussing where book reviews are headed. It was a lively discussion.

Book bloggers took center stage at the first ever Book Bloggers:The New Buzz Builders panel, moderated by Jennifer Hart, who blogs about books for Harper Collins Publishers at bookclubgirl.com. Even though this panel was not publicized as much as the other panels, the room was overflowing. There were six other popular bloggers, BethFishReads, The Written Word, Booking Mama, My Friend Amy, Maw Books, and She Is Too Fond of Books, on the panel, and the discussion was insightful, informative and interesting. There were lots of great questions, and it probably could have gone on for much longer if time allowed. The bloggers were mobbed like rock stars at the end of the panel. I think they were surprised by their popularity!
Posted by (Diane) bookchickdi at 3:17 PM