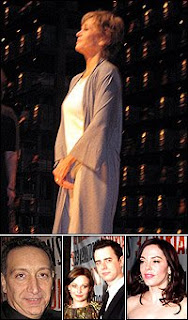 It's been 46 years since Jane Fonda appeared on Broadway, but you wouldn't know it from her bravura, Tony-nominated performance in 33 Varations , written by Moises Kaufman.

She portrays Dr. Katherine Brandt, a woman with a doctorate in music, who has Lou Gehrig's disease. The disease is slowly robbing her of her health, and before she is unable to travel, she plans to go to Bonn, Germany, to study Beethoven's 33 Variations on Anton Diabelli's waltz.

She has a strained relationship with her daughter, portrayed by Samantha Mathis. I had a difficult time with her role. I'm not sure if it was the role that I didn't enjoy, or Mathis' portrayal. Colin Hanks plays a nurse who falls in love with the daughter, and travels with her to stay with Katherine in Bonn.

Hanks is very good in his role, and as I overheard one woman sitting behind me remark, "he's adorable!", a statement with which I would agree.

Katherine's study is juxtaposed with Beethoven, his assistant Anton Schindler, and Diabelli. Zach Grenier is also nominated for his role as Beethoven, and he plays the character with great relish and bombast. I also liked Erik Steele in the assistant's role.

Diane Walsh is at the piano during the show, playing Beethoven's 33 Variations, and adding greatly to the show.

The show has closed in its limited run, but Fonda has to be a front-runner for this Sunday's Tony Awards.
Posted by (Diane) bookchickdi at 6:15 PM