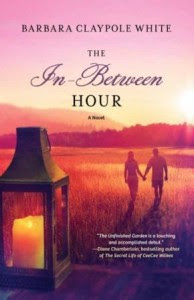 I admit that it took me about one-third of the way through Barbara Claypole White's The In-Between Hour to really start to appreciate it, but once I hit that mark, I could not put it down.

Will Shepard is a best-selling writer of a fictional series featuring a James Bond-like hero, Agent Dodds. He lost his five-year-old son Freddie in a fiery car crash with his son's mother four months ago, and there seems to be some question as to whether she crashed the car deliberately.

He is in unbearable pain, made worse by the fact that his elderly father doesn't remember that Freddie is dead. Every time his father brings up Freddie, Will has to tell him Freddie is dead and his father's grief reignites his own.

Will has to go back home to North Carolina to move his father from the nursing home where he has been kicked out.  Poole's description of the nursing home as "a place inhabited by nothing but echoes" is so evocative. With nowhere to go, they end up at the guest cabin owned by a local veterinarian, Hannah, who is hurting as well.

Hannah's adult son Galen suffers from severe depression and recently tried to kill himself. He is moving back home, and Hannah is at a loss as to how to help her son. She has hidden from him the fact that her own father killed himself, and Hannah is panicked that Galen has inherited the depression that took her father's life.

Will and Hannah are fragile. Hannah handled her life by becoming a "people pleaser with (expletive) boundaries" as Galen describes her.  Will handled his terrible childhood by leaving as soon as he could.

Will's mother suffered from serious mental illness, and his father tried to care for her at home, which left Will the odd man out. His mom would get drunk, and was probably bi-polar. His father would try to keep Will safe by telling him to go his room and shut the door, and one of the best lines in the book reflects this. "Most of his family life had happened on the other side of his bedroom door."

Poole's book deals with single parenthood, childhood traumas, depression, loneliness and family secrets. In her unique setting of the Occoneechee Mountains in North Carolina, she brings the native American tribe of the Occaneech Band of the Saponi Nation into the story through Will and his father, and I found that so interesting.

The Reader's Guide with discussion questions and a listening guide added a great deal to the story for me. I've already created a playlist with the listening guide suggestions.

Although this is a love story, there is so much more to it. As the mother of two adult sons, like Hannah, I appreciated her relationships with her sons. Not only were the main character of Will and Hannah wonderful and real, so were the minor ones, including Will's dad, Galen and Poppy, Hannah's free-spirit friend. Watching Will and Hannah work their way through their problems and pain was a journey well worth taking.

rating 4 of 5
Thanks to TLC Tours for putting me on Barbara Claypole White's tour. The rest of the stops are here: