The Seduction of Miriam Cross by W.A. Tyson 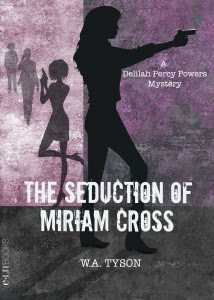 Delilah Percy Powers operates a private investigation office in Philadelphia. One of the more interesting things about the office is that it is staffed by all women. Delilah was a week away from her marriage when her fiance was killed in a kayak accident. She mourns him still years later and his body was never found. Maybe that's why the PI business interests her so.

Margot is the office manager and an ex-nun possessed with "uncanny intuition". Barb is a sensible, resourceful stay-at-home mom married to a cop. She was looking for a job with flexible hours, and working for Delilah fit the bill. Natasha is a single mom of a three-year-old boy who lived on the streets for awhile and is tough as nails.

Their newest client wants Delilah to investigate her aunt's murder. Miriam Cross wrote feminist literary novels and she was found decapitated in a house she rented under an assumed name. Cross was not well liked by many people, her novels were controversial, but as the investigation proceeds, it becomes clear that she wasn't the quiet maiden aunt that her niece was led to believe.

The investigation uncovers links to white slavery, a financial institution's involvement, mob connections, an underground railroad system for abused women run by a nun, a hacker trying to get a job with Percy Powers, and Cross' kinky relationship with two men. I have to confess that I had trouble following the resolution of the convoluted mystery, but Tyson did keep me turning the pages to find out what was going to happen.

Thanks to TLC Tours for putting me on W.A. Tyson's tour. The rest of the stops are here.