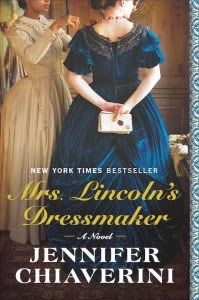 Anyone who saw Steven Spielberg's movie Lincoln last year may remember the character of Mrs. Keckley in a few scenes in the movie, played by actress Gloria Reuben. I had known of Mrs. Keckley, but not of her story, which is fascinatingly brought to life in this new novel.

Keckley was born a slave, and purchased her and her young son's freedom through her earnings as a seamstress. Her son was born of a rape by a white man, an acquaintance of her owner who failed to protect her from the man.

Elizabeth loved her son George, and was thrilled when he went to college. She became a modiste to many famous women in Washington DC, most notably Mrs. Jefferson Davis, of whom she was very fond.

As the succession of the Southern states portended the Civil War, Mrs. Davis wanted Elizabeth to come with her to Alabama, but Elizabeth was wary of going further South. Her reputation led her to be summoned to the White House to meet with Mrs. Lincoln and she became the modiste (dressmaker) for the First Lady.

Through Mrs. Keckley, the reader is privy to private and public moments in the White House. Mr. Lincoln is portrayed as a humble, honorable man, one who dearly loved his wife and children. Mary Lincoln is lonely, shunned by many of the society people in Washington as an unsophisticated outsider.

Elizabeth became Mrs. Lincoln's confidante, the one to whom she turned to when she was troubled. Mrs. Lincoln was wary of the men in Mr. Lincoln's cabinet and she freely shared her opinions with her husband, who may have agreed with her, but was more reticent to do anything about it.

When her son Willie died, Mrs. Lincoln was inconsolable, and Elizabeth stayed by her side. When Mr. Lincoln was assassinated, again it was Elizabeth who stayed with her, even leaving her own successful seamstress business behind to accompany Mrs. Lincoln on her move to Chicago.

I didn't know much of Mary Lincoln's life after she left Washington, and so this part of the novel truly captured me. Elizabeth assisted Mrs. Lincoln in trying to sell her dresses off to cover her over $70,000  debt, mostly from her shopping trips to New York City.

They journeyed to New York and became involved with brokers who took advantage of them. Congress had yet to fund any pension for Mrs. Lincoln, so she had no income. Elizabeth came upon the idea of writing a memoir about her life as a way to earn money she could share with Mrs. Lincoln, but that became a disaster which haunted her the rest of her life.

Chiaverini, who has written many novels about quilting, came to this story after hearing about a quilt that Elizabeth made for Mrs. Lincoln from pieces of material she used in various dresses made for Mrs. Lincoln. That led her to the book that Mrs. Keckley wrote, Behind the Scenes.

I enjoyed getting to know these two disparate women who became unlikely friends. Chiaverini cleverly uses Elizabeth's story to bring us right into the inner sanctum of the White House during the most turbulent time in our history. She brings the Lincoln family to vivid life and yet in the end, it is Elizabeth Keckley's story that is truly amazing. I will be looking for more information about her.

rating 4 of 5
Thanks to TLC Tours for including me on Jennifer Chiaverini's tour is here: