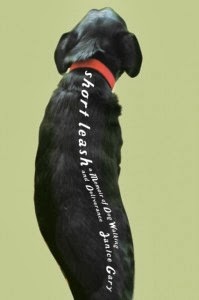 Janice Gary always loved dogs. The day she found Barney a Lab/Rottweiler mix running loose in the road she was not in a good place in her life. She had moved from near Washington DC to rural Georgia, following her husband as he got a new job.

She had left behind a support group she liked for adult children of alcoholics (ACOA), didn't have a job herself, and had no friends. She didn't know it, but Barney would become a big part of her life.

When Janice was just 20 years old, she left home and moved to San Francisco to become a musician. She didn't know anyone, the days of free love had ended, and where she ended up in Berkeley was not such a great place.

One night she was attacked and raped while trying to find a friend's apartment. The attack changed her entire life; she became fearful of being anywhere alone. Eventually she moved back home.

While walking Barney one day, he was attacked by a dog. His response to being attacked was that Barney became an aggressive dog. Anytime he saw a dog, he would attack. He didn't like people coming too close either. It made walking Barney very difficult; they couldn't walk where most people did- parks, waterfronts, neighborhoods. That meant Janice had to walk Barney in deserted areas, which exacerbated her memories of being attacked herself.

One vet thought that Janice's fear was triggering Barney's aggression. So twenty years after she was attacked, Janice went back to Berkeley and tried to come to terms with what happened to her. As she walked the street where the attack happened, she thought "the shadow of the past walked with me wherever I went."

At the age of 48, Janice applied to and was accepted into a writing program. She had decided that this was something she needed to pursue, and let her fears go. I am in awe of women who can do this. I have a friend who started a whole new life in her 40s, went back to college, got her degree and is now in a career that she loves. Janice even won an award at her graduation ceremony for a personal essay she wrote about her father, who committed suicide when she was teen.

As Barney aged, he had more medical problems. Anyone who has owned a dog knows how this goes. They made countless visits to vets and specialty vets (I didn't even know there was such a thing as a 'canine dermatologist'). This section of the book really touched my heart, as we had a very sick basset hound and went through many of the same emotions as Janice and her husband.

Short Leash is such a personal book, but it speaks to so many of us. Anyone who has to overcome a trauma, anyone who has loved a dog, anyone who had a tough childhood will find something to identify with here. Janice Gary writes honestly and from her heart, and this book moved me deeply.

rating 4 of 5
Thanks to TLC Tours for putting me on this tour. The rest of Janice Gary's tour stops are here: